The Asia Cup 2022 to be played in the United Arab Emirates from August 27 could be the final opportunity for a lot of youngsters, including Arshdeep Singh and Avesh Khan, to prove their mettle and stake claim for the ICC T20 World Cup in Australia later this year. 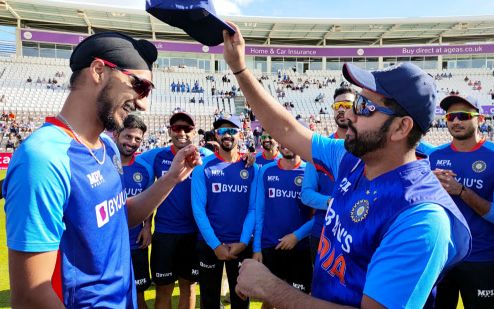 Mumbai: The Asia Cup 2022 to be played in the United Arab Emirates from August 27 could be the final opportunity for a lot of youngsters, including Arshdeep Singh and Avesh Khan, to prove their mettle and stake claim for the ICC T20 World Cup in Australia later this year.

The Indian cricket board on Monday announced a 15-member squad for the Asia Cup with stalwarts such as Virat Kohli and opener KL Rahul making a comeback even as pace spearhead Jasprit Bumrah and Harshal Patel have missed out due to back and rib injury, respectively.

It has given an opportunity to the likes of Arshdeep, Avesh, Ravi Bishnoi and Deepak Hooda to showcase their skills in the continental tournament and make a strong case for their inclusion in the T20 World Cup in October-November this year.

All four cricketers have made an impact in the shortest format, after making their debuts post the 2021 T20 World Cup debacle in the UAE. While tweaker Bishnoi has impressed with his variations, taking 15 wickets in nine matches at an economy of 7.15 in the shortest format, his mastery of the googly has left many batters in a tizzy.

The lanky Arshdeep Singh made his debut during the tour of England, and in a short career of six matches, has left a huge impression, especially in the recently concluded series against the West Indies. He has picked up 15 wickets, going at an economy of 6.33 and bowling some outstanding yorkers.

Avesh Khan's ability to extract pace and bounce in the West Indies has seen him being given an opportunity during the Asia Cup, which will allow him to stake another claim for a place in the World Cup squad. He has picked up 11 wickets from 13 matches, going at an economy rate of 8.67, according to ICC.

As for Hooda, his aggressive intent and versatility has seen him beat off competition from Shreyas Iyer. The 27-year-old has played nine T20Is, scoring 274 runs at an average of 54.80 and a brilliant strike rate of 161.17, with one memorable century against Ireland. His handy off-spinners have also worked in his favour and will give the team an additional bowling option.

A good Asia Cup for the quartet and they could well be eyeing berths for the World Cup in Australia.

The Asia Cup will be played in the UAE from August 27 to September 11. The 15th edition of the tournament will be played between six teams, including a qualifier team. India enter the competition as defending champions and are also the most successful team, having won the trophy seven times. They opened their title defence against Pakistan on August 28.

While the last edition of the tournament was held in an ODI format, this edition will be played in T20 format due to 2022 being a T20 World Cup year. India are in Group A alongside Pakistan and a qualifying team while Sri Lanka, Bangladesh and Afghanistan form Group B. IANS