Australia ended Day One at 166/2 in 55 overs that could be bowled because of rain. At Stumps, Labuschagne and Steve Smith remained unbeaten on 67 and 31. 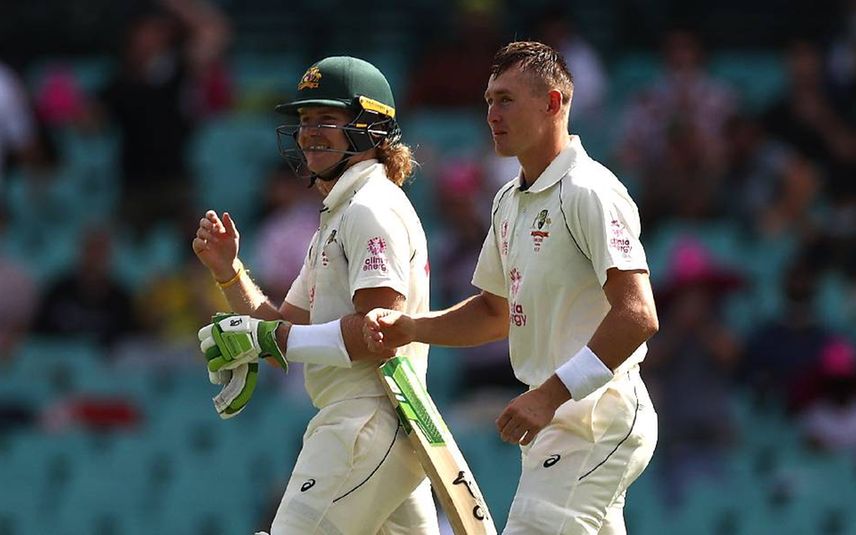 Sydney: Gritty half centuries from Marnus Labuschagne and debutant opener Will Pucovski on Thursday put Australia ahead on the rain-hit opening day of the third Test against India at the Sydney Cricket Ground.

Australia ended Day One at 166/2 in 55 overs that could be bowled because of rain. At Stumps, Labuschagne and Steve Smith remained unbeaten on 67 and 31.

Earlier, after winning the toss, the hosts didn't have a great start as they lost opener David Warner early in the innings. Warner, who is coming back from groin injury after having missed the first two Tests, was caught in slips by Cheteshwar Pujara off the bowling of right-arm Mohammed Siraj in the fourth over. Warner scored five runs of the eight balls he faced.

Australia had reached 21/1 when rain came pouring in the seventh over and players left the field. Umpires called for early Lunch and the play resumed only after a lengthy break in the second session.

Indian bowlers -- Jasprit Bumrah, Siraj and Ravichandran Ashwin -- all bowled on tight lines and lengths and made sure the hosts didn't score freely after the break. However, in the last 45 minutes of the session, the visitors were a bit sloppy in the field as wicketkeeper Rishabh Pant dropped two catches of Pucovski -- one against Ashwin and other against Siraj -- and allowed the debutant to score his maiden half century as Australia reached 93/1 at Tea.

In the final session of the day, Australia lost Pucovski who became the first Test scalp of debutant Navdeep Saini. The 22-year-old got out lbw after scoring 62 runs in the 110 deliveries he faced during the course of his innings.

Smith, who had struggled in the first two Tests, came out with a positive intent this time around and scored quite a few boundaries and didn't let the Indian bowlers, particularly Ashwin, dictate terms.

Along with Labuschagne, the duo added 60 runs for third wicket and laid a solid platform for the hosts to set a huge first-innings total.