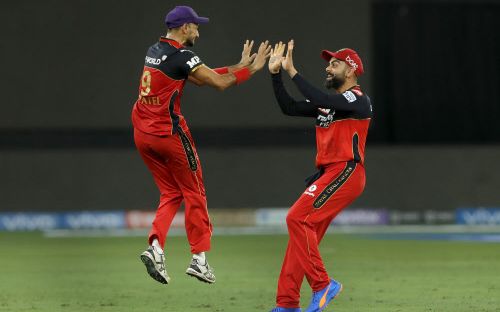 Dubai: A thumping win over defending champions Mumbai Indians boosting their confidence, Royal Challengers Bangalore would look to build on the momentum when they take on a struggling Rajasthan Royals in their Indian Premier League match here on Wednesday.

The Virat Kohli-led RCB are currently at third spot with 12 points from 10 matches and a win over RR will virtually put them in the play-offs.

On the other hand, with eight points from 10 matches, it will be a make-or-break outing for RR as a loss on Wednesday can put them in a tight situation in their bid for a last-four berth.

RCB did not have the best of starts after the IPL's resumption as they lost two consecutive matches, including the forgettable nine-wicket defeat to Kolkata Knight Riders where they made just 92 runs.

They were then outplayed by Chennai Super Kings though Kohli and Devdutt Padikkal came good with 53 and 70 respectively.

The previous match against MI, however, gave them their first win after the IPL's resumption with Kohli hitting his second consecutive fifty -- 51 -- and Maxwell also coming good (37-ball 56).

Kohli, who is stepping down from RCB captaincy after this season, would look to continue his good form.

South African legend AB de Villiers, on the other hand, needs a big one after scores of 0, 12, 11 while Maxwell will be keen to stay in good touch with the T20 World Cup not far.

On the bowling front, Harshal Patel is the star with six wickets from three matches, including a hat-trick in the last match, and Yuzvendra Chahal is also in fine form with five dismissals.

A bit of worry is New Zealand fast bowler Kyle Jamieson, who has not taken any wicket from the two matches he has played so far.

Rajasthan, on the other hand, have been outplayed by their respective opponents in their last two matches after winning their first game by two runs.

Except for captain Sanju Samson and Yashasvi Jaiswal, most of the RR batsmen are struggling.

Lone ranger Samson hit 70 and 82 after scoring four runs in the first match but other batsmen have let the team down.

In Monday's match against Sunrisers Hyderabad, it was Samson again who took his side to 164 for 5 with a well-calculated 82 on a sticky wicket where stroke-making was difficult.

However, the score proved insufficient as RR lost by seven wickets, which dented their play-off chances as they remained at the sixth spot with eight points.

Among bowlers, Kartik Tyagi (3 wickets), Chetan Sakariya (4 wickets) and Mustafizur Rahman (3 wickets) have done reasonably well for the side.