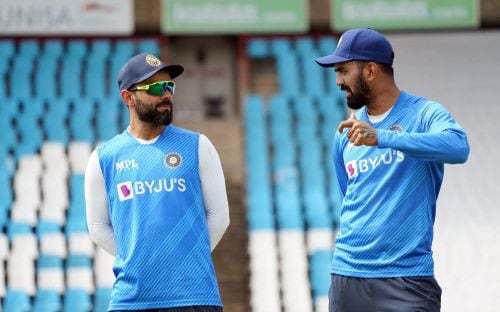 New Delhi: Former skipper Virat Kohli and a fit-again KL Rahul on Monday returned to a 15-member Indian squad for the Asia Cup while senior pacer Jasprit Bumrah missed out owing to a back injury.

The Asia Cup will be held in Dubai and Sharjah from August 27 to September 11.

Rahul, who did not feature in the T20 series against the West Indies due to COVID-19, has recuperated from his sports hernia surgery, and is back as vice-captain.

The notable names dropped from the main squad are batter Shreyas Iyer and left-arm spinner Axar Patel. Seamer Deepak Chahar, who has had a four-month lay-off due to a hamstring tear and a back injury was also among reserves.

The other absentee from the squad was pacer Harshal Patel, owing to a rib injury.

"Jasprit Bumrah and Harshal Patel were not available for selection owing to injuries. They are currently undergoing rehab at the NCA in Bengaluru," the BCCI said.

Coach Rahul Dravid and captain Rohit Sharma, along with the five-member selection committee, have identified the core 20 players going ahead and it is only logical that there won't be any massive changes by the time the T20 World Cup-bound squad is announced.

The 15 for the Asia Cup, the three standbys and the two injured players (Bumrah and Harshal) are now the core team.

While Axar, who has been in fine form of late could feel a bit shortchanged, the presence of four spinners -- Ravichandran Ashwin, Ravindra Jadeja, Ravi Bishnoi and Yuzvendra Chahal -- meant that there wasn't a space for a fifth slow bowler.

Since the matches will being held on the slower tracks in the UAE, there are only three specialist pacers in the side in Bhuvneshwar Kumar, Avesh Khan and Arshdeep Singh, with Hardik Pandya being the fourth pacer in the attack.

But when the team boards the Australian flight, there is every possibility that both Bumrah and Harshal would make the cut, and hence, Bishnoi might have to make way.

As far as keepers are concerned, Rishabh Pant and Dinesh Kartik have sealed the two spots by a fair distance, with both Ishan Kishan and Sanju Samson failing to grab the opportunities that came their way.

Kishan cannot be picked as India now have multiple attacking opening options, apart from Rohit and Rahul, which includes Pant and Suryakumar Yadav.

Even Deepak Hooda has scored a hundred opening the innings. It was Hooda's off-breaks that helped him pip Shreyas, who showed some form in the inconsequential fifth T20I against the West Indies, in which he scored 64 off 40 balls.