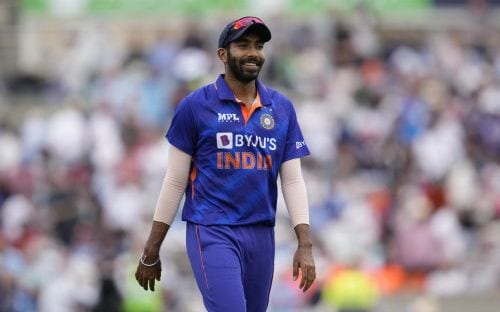 London: Jasprit Bumrah on Tuesday became the first Indian pacer to scalp six wickets in England in an ODI match.

Bumrah achieved this feat during the ongoing first ODI of the three-match series against England, here at the Kennington Oval on Tuesday, where he registered his career-best figures of 6/19.

With this record, Bumrah registered the third-best figures by an Indian bowler in an ODI match. The list is dominated by Stuart Binny with the figures of 6/4 against Bangladesh in 2014, followed by Anil Kumble with 6/12 against West Indies in 1993.

Coming to the match, Bumrah's six-wicket haul and three wickets by Mohammed Shami helped India to restrict England at 110 in the first innings of the ongoing first ODI of the three-match series, here at the Kennington Oval on Tuesday.

Apart from Bumrah and Shami, Prasidh Krishna took one wicket. For England, only Jos Buttler could play a decent innings as he scored 30 runs.

England registered their lowest ever total against India in ODIs. India now need a total of 111 runs to win in 50 overs.