Earlier, New Zealand started with a flourish, but the Indian bowlers - led by Jasprit Bumrah (1/31) - came back strongly to restrict the Kiwis to 203/5 in their 20 overs. 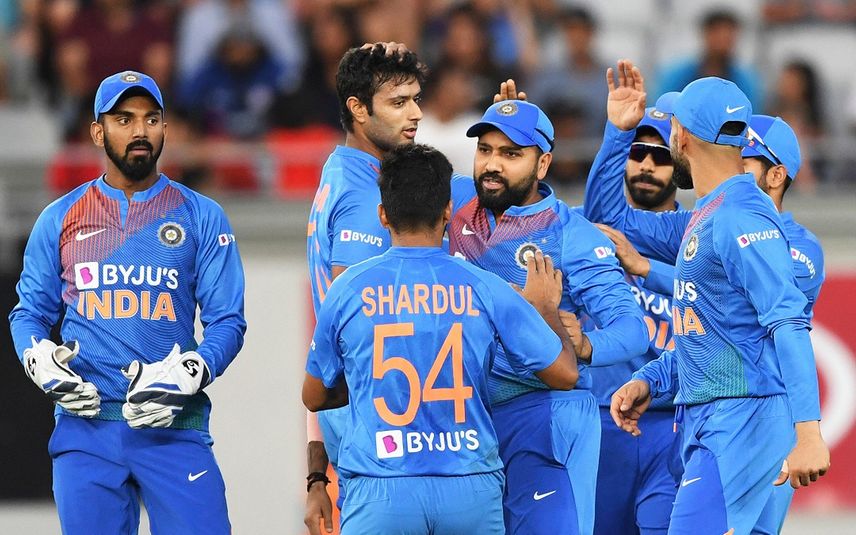 Auckland: It was another special display of batsmanship from young Shreyas Iyer as he continued from where he had left against Australia in Bengaluru to take India home in the opening T20I against New Zealand at Eden Park on Friday. The visitors led by Iyer's 58-run knock chased down New Zealand's total of 203 with six balls to spare.

It was only poetic justice that Iyer took India home with a six off Tim Southee as the Indian fans in the crowd went berserk. But it wasn't about just Iyer. He had the perfect second fiddle in Manish Pandey (14* off 12 balls) as the duo ensured they kept the required run-rate in check even after losing in-form K.L. Rahul (56 off 27 balls) and Virat Kohli (45 off 32 balls).

In the end, they need 18 off the last two overs. But Iyer wasn't waiting till the last over and started the 19th over with a six. That was the end of New Zealand's hopes as he then hit a boundary off the next ball to make it 8 needed off 10 balls. After that, it was a walk in the park for the visitors. The unbeaten 62-run partnership off 34 balls between Iyer and Pandey ensured that India took a 1-0 lead in the five-game series.

But, it wasn't the start India would have wanted in the chase with Mitchell Santner sending back Rohit Sharma for just 7 in the second over. But Rahul and skipper Kohli kept the scoring rate going and the visitors looked well on course to overhaul the target before Ish Sodhi sent back Rahul, caught by Southee as he ran in from long-off to complete an easy catch.

Kohli left after a couple of overs as Martin Guptill took a brilliant catch running in at deep mid-wicket off Blair Tickner's bowling. With both the in-form batsmen back in the hut and the scoring rate rising with every passing delivery, it was all about going for the boundaries and Iyer and Pandey decided to plan it out.

In fact, it was the Kiwi bowlers who looked clueless towards the end of the game as they failed to rein in the Indian batsmen, especially Iyer as Pandey was happy to rotate the strike and hold one end up.

Earlier, New Zealand started with a flourish, but the Indian bowlers - led by Jasprit Bumrah (1/31) - came back strongly to restrict the Kiwis to 203/5 in their 20 overs.

Colin Munro (59) was the star of the show for the hosts at the top, but he was well supported by skipper Kane Williamson (51) and Ross Taylor (54*).

Put into bat, New Zealand had a great start as opener Munro and Martin Guptill put on a 80-run stand for the first wicket. Both the batsmen took the Indian bowlers to the task as they scored boundaries at will.

It was all-rounder Shivam Dube who provided India with the first breakthrough when Rohit Sharma took a brilliant catch on the boundary to dismiss Guptill who scored 30 off 19 balls.

Skipper Williamson then joined forces with Munro and took the New Zealand score to 116 before the left-handed opener was sent packing by Shardul Thakur in the 12th over. Munro scored 59 off just 42 balls and his power-packed innings was studded with 6 fours and 2 sixes.

Colin de Grandhomme, who came in next, didn't trouble the scorers as he was sent home by left-arm spinner Ravindra Jadeja in just his second ball of the spell. However, those two quick wickets didn't deter the hosts as Taylor and Williamson stitched a 61-run partnership and took the Black Caps' total to 178 before the skipper was dismissed by leg-spinner Yuzvendra Chahal.

The small ground ensured that the Kiwis kept finding the boundary ropes with Taylor looking to lead the show in the death overs for the home side. While Bumrah did look his brilliant self and gave away just four runs from the 18th over and picked the wicket of Tim Seifert, Taylor looked to take Mohammed Shami to task in the 19th as he started with a boundary. But the senior pro came back strongly and gave away just 9 runs from the over.

Bumrah twisting his ankle in the last over meant that he didn't look his usual self and gave away 12 runs as New Zealand had Taylor remaining unbeaten on 54 with a strike rate of over 200.