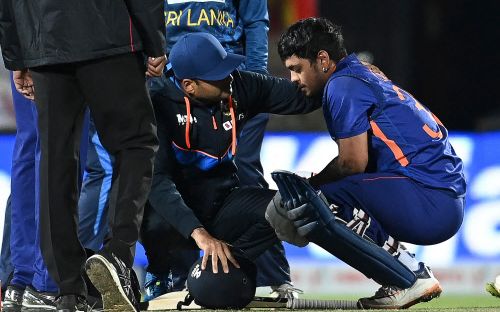 India's Ishan Kishan (R) is checked by medical staff after being hit by a bouncer during the second T20 international cricket match between India and Sri Lanka at the Himachal Pradesh Cricket Association Stadium in Dharamsala on February 26, 2022 | Photo: AFP

Dharamsala (Himachal Pradesh): India batter Ishan Kishan has been discharged from the hospital after suffering a head injury during the second T20I against Sri Lanka on Saturday.

"Ishan Kishan discharged from the hospital but he is under close observation of BCCI's medical team. He is likely to be rested from the third T20I against Sri Lanka," sources in the know of developments told ANI.

Ishan Kishan sustained a head injury on Saturday and was rushed to a hospital in Kangra, Himachal Pradesh after the second T20I. Apart from him, Sri Lanka batter Dinesh Chandimal was also taken to the hospital after he endured a thumb injury while fielding.

Coming to the second T20I, Shreyas Iyer smashed a stylish fifty before Ravindra Jadeja slammed 45 in 18 balls to help India defeat Sri Lanka in the second T20I by seven wickets on Saturday.

With this win, India also sealed the two-match T20I series (2-0) with a game to go. The third T20I between both sides will be played on Sunday. (ANI)