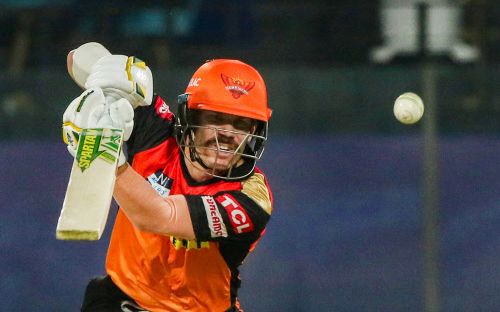 New Delhi: Out-of-form SunRisers Hyderabad opener David Warner has in recent times failed to make it to the playing XI in the second half of the 14th edition of the Indian Premier League in UAE. While the coaching staff has said it is looking to give youngsters opportunity, fans feel Warner has been handed a raw deal. The former skipper on Thursday evening posted a message on social media that has seen the debate intensify further.

Taking to Instagram, Warner posted: "It's not about who is real to your face, It's about who stays real behind your back." The post also had a few 'thumbs up' emojis.

He also posted a short video of him watching SRH's game against Chennai Super Kings on television and that has seen fans further debate on whether he should at least have been in the dug-out sharing his experience with the young players.

Speaking after the win against Rajasthan Royals on Monday, SRH coach Trevor Bayliss confirmed that the management is looking to give new players in the squad a chance to make a name for themselves, looking at how the side cannot make the playoffs this season.

"We can't make the final so have made a decision that we want the young players to experience not just the matches but time at the ground, around the set-up, and for this match we made the decision. He was not the only experienced player we left back at the hotel," Bayliss said during a post-match press conference.

"We have a number of young players that haven't been to the ground. Even as reserves. We wanted to give them an opportunity to come along and experience that. That may continue for a few more games yet. We don't know," he added.

Further speaking about Warner, Bayliss said: "We have got to sit down in a day or two and pick a team and pick a squad of 18. That's just the way it is. Dave is obviously watching the game back in the hotel and giving the guys support. It is the same as everyone else. We are all in this together.

"Look that certainly has not been discussed. It is something that..this is the last year before a major auction. Those decisions will be made further down the line. He has been a great contributor to Hyderabad Sunrisers for a number of years now. He is very well respected with the number of runs he has scored. I am sure he has got a lot more runs in him yet in the IPL."