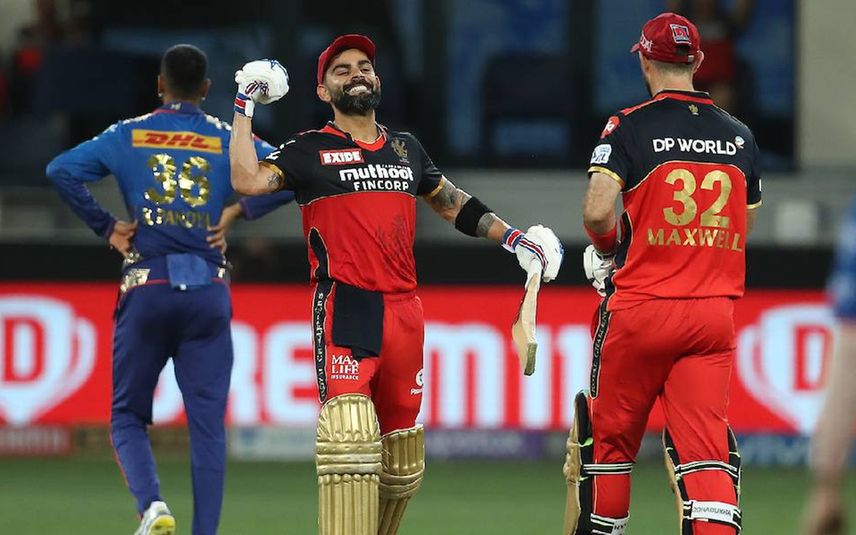 Dubai: Glenn Maxwell justified his million dollar contract with an all-round performance before Harshal Patel took a hat-trick to ensure a thumping 54-run victory for Royal Challengers Bangalore over Mumbai Indians in the Indian Premier League here on Sunday.

Maxwell (56 off 37 balls and 2/23) produced one of his better efforts in the IPL while Harshal (4/17 in 3.1 overs), the current Purple Cap holder removed Hardik Pandya, Kieron Pollard and Rahul Chahar off successive deliveries to defend a target of 165 without breaking much sweat.

Skipper Virat Kohli won the 'Battle of Bosses' against his national team deputy Rohit Sharma as RCB with 12 points are back in the play-off contention while MI with three successive defeats are now in a real spot of bother at seventh spot in eight-team table.

Kohli would also happy with his second half-century and the form of his premier spinner Yuzvendra Chahal (3/11 in 4 overs).

Rohit teed off with three boundaries in a single over from Kyle Jamieson. MI looked in complete control during the Powerplay as Quinton de Kock also got a few boundaries.

However it was Chahal, who removed de Kock and then Ishan Kishan's full-blooded shot was just about parried away by Rohit, who was hit on the left wrist trying to avoid a body blow.

That must have affected his concentration as he tried to hit a second six off Maxwell having hit one in the earlier over but this time was pouched by Devdutt Padikkal at the long-on boundary much to the delight of rival skipper Kohli.

Ishan Kishan (9 off 12 balls), who has barely managed 100 runs in nine IPL matches this season, would increase the worry of national selectors as he played an irresponsible hoick against the turn off Chahal and Krunal Pandya (5) then trying to break the logjam was bowled by Maxwell.

However, what disappointed the MI skipper most was how Surykumar Yadav (8) chased a wide yorker from Mohammed Siraj to give simple catch to short third man as MI slumped to 97 for 5 with recovery looking implausible.

Then Harshal got his hattrick to finish off the proceedings in style.

Kohli, who completed 10,000 runs in T20 cricket, scored 51 off 42 balls with three fours and three sixes but it was Maxwell who justified his expensive price tag with a 37-ball blitzkrieg before Jasprit Bumrah brought MI back in the game.

Maxwell's innings had six fours and three sixes as he showed true destructive potential with switch hits, lap shots and flicks during the final overs when he launched into MI pacers Adam Milne (1/48 in 4 overs) and Bumrah (3/26 in 4 overs) with utter disdain.

Such was the ferocity of Maxwell's hits that even the normally calm MI skipper Rohit looked helpless before Bumrah removed both Maxwell and AB de villiers (11) off successive deliveries which at least helped them save 20 to 25 runs in the final two overs.

The normally dependable Devdutt Padikkal (0) had an off-day as Bumrah bowled a beauty which pitched on length and moved away taking the outside edge into Quinton de Kock's gloves.

Kohli found a confident partner in Bharat (32 off 24 balls) as they quickly added 68 runs for the second wicket. Bharath for good measure swept Rahul Chahar against the turn for two sixes while Kohli also imperiously pulled Bumrah for a six over deep mid-wicket.

However, Bharat couldn't convert his start as Chahar bowled one straight and full and the batter didn't get the required elevation being holed at long-off boundary.

Once Bharat was out and Maxwell came in, RCB despite some great shots couldn't force the pace as Kohli and Maxwell added 50 runs in seven overs. PTI