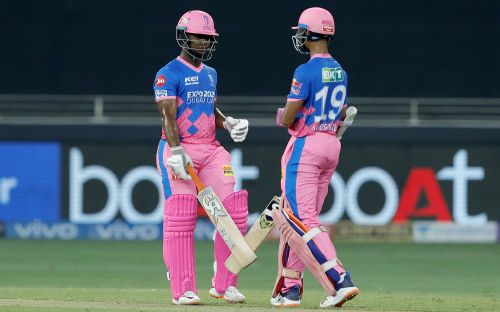 Dubai: Opener Yashasvi Jaiswal (49) and Mahipal Lomror (43) starred with the bat but Punjab Kings pulled things back in the rear end to bowl out Rajasthan Royals for 185 in their IPL match here on Tuesday.

Arshdeep Singh returned with a five-wicket haul after Mohammed Shami claimed three as the duo restricted Rajasthan inside the 200-mark after they were going hammer and tongs at one stage.

Put into bat, Jaiswal was part of in two vital partnerships, adding 54 with his new opening partner Evin Lewis (36) and then sharing another 48 off 28 balls with Liam Livingstone (25).

Lomror then smashed his way to a 17-ball 43, studded with four sixes and two fours.

However, Punjab pulled things back in the end with Shami claiming two wickets to restrict RR inside 200.

Earlier, Jaiswal smashed two successive fours in the first over off Shami, while debutant Lewis sent Ishan Porel, also playing his first match, sailing over for a six as RR had a flying start.

The West Indies batsman punished Porel for bowling short and wide, blasting four boundaries in the fourth over.

Deepak Hooda was then taken to the cleaners as he bled 13 runs.

After the powerplay, RR were at 57 for one.

Jaiswal then reverse swept England spinner Adil Rashid for a six, before depositing him over long off for another maximum.

RR skipper Sanju Samson failed to make any impact as a terrific one-handed catch by KL Rahul ended his stay and gave Porel his maiden wicket.

Livingstone then joined Jaiswal, who picked up another maximum off Rashid in the 9th over.

Jasiwal raised the team hundred with another four off Harpreet Brar in the 11th over.

Livingstone also tried to match his partner as he scooped one fine over KL Rahul and then smacked one over mid-wicket off Arshdeep.

A sensational catch at deep midwicket by Fabian Allen sent Livingstone back to the hut with RR slipping to 116 for 3.

Jaiswal couldn't complete his fifty as his leading edge was held on to by Mayank at short cover.

New man Lomror then went on a six-hitting spree, blasting two maximums off Rashid before sending Hooda for a couple more in the 16th over as RR crossed the 150-mark.

Lomror also smashed two fours as Hooda conceded 24 runs off his second over.

However, Shami and Arshdeep restricted their opponent to a competitive score in the end. PTI