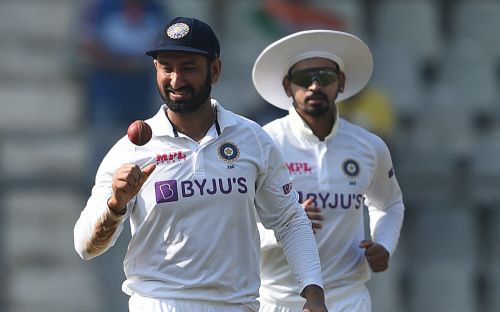 Centurion: Ahead of the South African series, Indian batter Cheteshwar Pujara said the visiting side's bowlers have always been the "difference" between two teams in earlier tours as he hopes for a similar performance in the upcoming games.

South Africa and India will lock horns in the three-match Test series before the two sides meet in the limited-overs format. The Test series begins on December 26.

Pujara has backed the Indian bowlers to deliver for the visitors in the upcoming South Africa series.

"Our fast bowlers have been the difference between the two sides whenever we have played abroad. If you look at the Australia series, even if you look at the England series, we have done exceptionally well as a bowling unit and I am sure that will be the case even in South Africa," ESPNcricinfo quoted Pujara as saying.

"Our fast bowlers are our strength and I hope that they will be able to utilise these conditions and give us 20 wickets in every Test match," he added.

India recenty defeated New Zealand in the Test series 1-0 and Pujara feels this is the best opportunity for the Indian squad to clinch the series in South Africa.

"The good thing is we played a couple of Test matches in India. So most of the guys are in touch, and when it comes to preparation, the support staff has been excellent. They have been supporting us well and we have five or six days more before we head into the first Test," said Pujara.

The Indian Test squad arrived in Johannesburg, South Africa on Thursday. Rohit Sharma will be missing the upcoming Test series after the hamstring injury and Priyank Panchal was named as the replacement.

Rahane, Pujara returning to India ranks in whites could only be a chance happening now