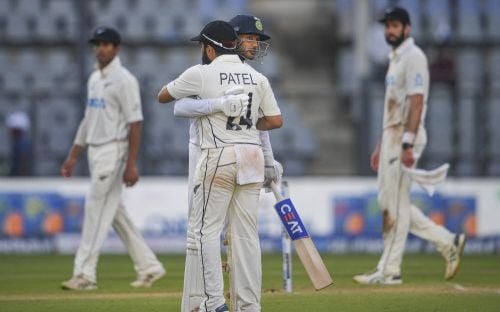 Mumbai: It was a wicket galore at the Wankhede Stadium on Day 2 as India and New Zealand bowlers scalped 16 wickets in total after which hosts find themselves on the top of the ongoing second Test here at Mumbai.

After the end of Day 2 play, India's score in the second innings read 69/0 with Mayank Agarwal and Cheteshwar Pujara unbeaten on the field with innings of 38* and 29* respectively. Hosts now lead Kiwis by 332.

Starting the day, the stars were perfectly aligned for the Mumbai-born spinner, Ajaz Patel as he scripted history by becoming only the third bowler in the history of Test cricket to bag all 10 wickets in an innings. His historic effort overshadowed the heroic 150-run knock of Mayank Agarwal as India were bowled out for 325.

For hosts, Ravichandran Ashwin and Mohammed Siraj were the picks among the bowlers as the duo scalped three and four wickets respectively.

Resuming the final session at 38/6, visitors had nowhere to hide as Indian bowlers clawed further deep and bowled them out after 29 overs in their first innings.

Then starting their second innings, India stood firm as Agarwal and Pujara frustrated the Kiwi bowlers to the full extent.

Team rebuilding for next T20 World Cup, we have got to be patient with ...