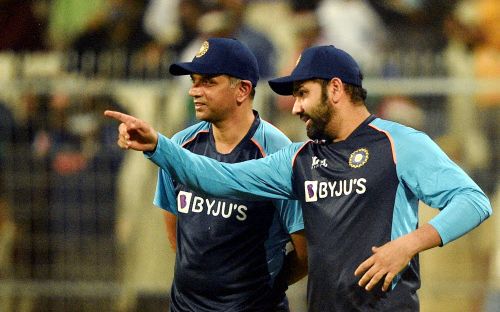 After securing a thumping T20I series win over New Zealand, India under the coaching of Dravid will face New Zealand in the two-match Test series which gets underway from Thursday.

Dravid, who has played 164 Tests for India, will offer a great amount of guidance to the young guns, according to Pujara.

"After the WTC we all were hurt but we came back strongly in England and we played very good cricket. Now the team is back together, confident and new coach Rahul bhai is there," said Pujara in the virtual press conference.

"That will help most of the players, especially the young players, who have worked with Rahul bhai during the Under-19 and India A series.

"And even someone like us, who are experienced players. I have played with Rahul bhai and worked with Rahul bhai during the A series. All of us are looking for his guidance. The amount of experience he has as a player and coach that will help the team," he added.

Pujara isn't concerned about the New Zealand pace attack having already weathered the storm in 2017.

"We have our strategies prepared against Neil Wagner and we have also played him in 2017, so we know how he bowls in Indian conditions so we will plan accordingly," said Pujara.

The India batter is a key cog in the batting wheel of the Indian team but has failed to score a Test ton in recent times."I have been scoring runs, the 50s, 80s or 90s. I've not scored a ton but I am not worried about it as long as I keep batting well and contributing to the team's total. My focus is giving best for the team," he signed off.