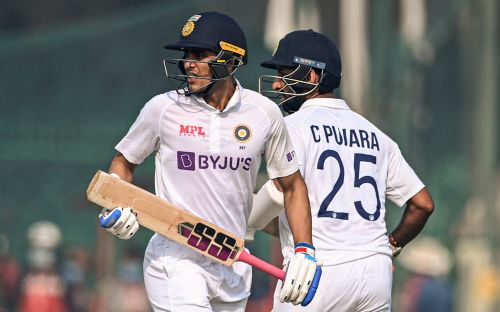 Kanpur: Shubman Gill scored a gutsy fifty while Cheteshwar Pujara stood tall as India held fort after Mayank Agarwal's early dismissal in the opening session of day one of the first Test against New Zealand on Thursday.

In the first session, India scored 82 runs for the loss of one wicket with Pujara and Gill unbeaten on 15 and 52 respectively here at the Green Park Stadium.

It was a cautious start from India in Kanpur, however, the Kiwis still managed to take the wicket of Mayank Agarwal (13).

Opting to bat first, India got off to a cautious start as the side scored 21 runs in the first half an hour of play without losing a wicket. However, Kyle Jamieson drew first blood for New Zealand as he dimissed Mayank in the eighth over. But Gill continued his good show and hit his fourth Test fifty.

Earlier in the day, Shreyas Iyer and Rachin Ravindra made their Test debuts respectively. The right-handed India batter received his maiden Test cap from the legendary cricketer Sunil Gavaskar.