Kohli has put Team India in situation where there is no looking back: Rohit Sharma 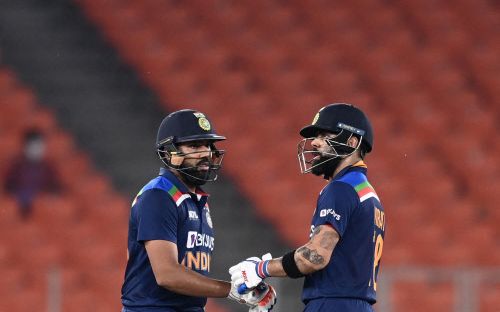 Rohit was named India's new ODI skipper last week and he takes the reins from Kohli as India gear up for the South Africa series.

"He's (Kohli) put the team in the situation where there is no looking back. Those five years that he has led the team led from the front every time we stepped onto the park. And yeah! there was a clear grit and determination to win every game that was the message to the entire squad," Rohit said in an interview posted on the BCCI website

"We had a great time playing under him obviously we played I played a lot of cricket under him and enjoyed every moment and I will still continue to do that," he added.

Rohit said Team India will be looking forward to improving as a side going forward.

Rohit Sharma, who has captained India 32 times to date, said he was "deeply honoured" to lead the side.

"I'm deeply honoured and grateful for the opportunity. It's a huge responsibility. I'm absolutely happy about it. I look forward to leading team India in white ball cricket. It's going to be an exciting journey, something that I'm looking forward to," said Rohit.

"Whenever I've gotten an opportunity I've tried to keep it very simple, tried to keep one thing in common which is clear communication to the players, making sure that they understand their role," he added.

The Indian limited-overs skipper will make sure there is "clear communication" between the players.

"For us, the coach-captain, it's important to make sure that we have clear communication and clear understanding of a player's role," said Rohit.

"That is something that I will be looking forward to doing, making sure that people do understand what they've been picked for in the team, what they have to do as an individual," he signed off.