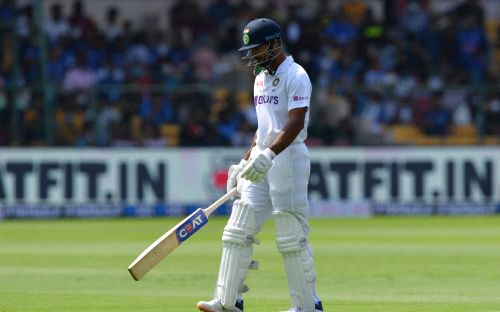 Mayank Agarwal walks back to the pavilion after his dismissal | AFP

Bengaluru: Turn and uneven bounce on a first-day pitch had the home batters in a spot of bother as India reached 93 for four at tea on the opening day of the second Test against Sri Lanka, here on Saturday.

With the sun shining brightly, the pink ball did not swing enough to trouble the batters but a few balls kept really low, making it tough for home team batters.

While Mayank Agarwal (4) was run out, Rohit (15) was dismissed by left-arm spinner Lasith Embuldeniya, who got the ball to turn and bounce.

Hanuma Vihari's eventful stay was ended by Praveen Jayawickrama, also a left-arm spinner, while Virat Kohli's carefully crafted short knock met its end with a ball that kept really low and had him plumb off off-spinner Dhananjaya de Silva.

India could have lost another wicket but Rishabh Pant (16 batting) was dropped by Suranga Lakmal in the deep when he was on 4. Shreyas Iyer (1) was at the crease with him when the break was taken.

Vihari (31) and Kohli (23) confidently played drives and cuts to raise a 47-run stand for the third wicket but once it was broken, batting seemed to be a challenge.

Hardly any grass on the track at M Chinnaswamy stadium, India expectedly opted to bat even as Rohit, who looked fluent, and Agarwal could not utilise the opportunity to score big.

Pacer Lakmal maintained a probing off-stump line but left-arm pacer Vishwa Fernando largely kept it on middle and leg, from where Rohit easily played on-drives. Agarwal, who dispatched one over-pitched from Lakmal to cover region boundary to start off, threw away his wicket when he got hismelf run out in the second over of the day.

Fernando appealed for a leg before but the umpire was unmoved. Agarwal looked for a single but Rohit also took a couple of steps but stopped realising that there was no run on offer.

But it was too late for Agarwal to get back to his crease since he was already half-way down and was run-out.

Left-armer Fernando dug one short and the Indian skipper dispatched that with ease into the spectators stand with his trademark pull shot.

Left-arm spinner Lasith Embuldeniya created a chance in his very first over when he induced an edge from Vihari but it just fell short of first slip.

However, he scalped the Indian captain, getting him caught in the second slip. The ball had turn and bounce as it took the edge and flew towards Dhananjaya de Silva, who completed the catch at gully.

Vihari survived when umpire judged him leg before off Jayawickrama but the DRS review showed that the ball was missing the leg stump. He was 31. However the same bowler had him caught behind soon.

Kohli, who is chasing a long overdue Test hundred, grew in confidence but low-bounce did not allow him stretch his stay. PTI