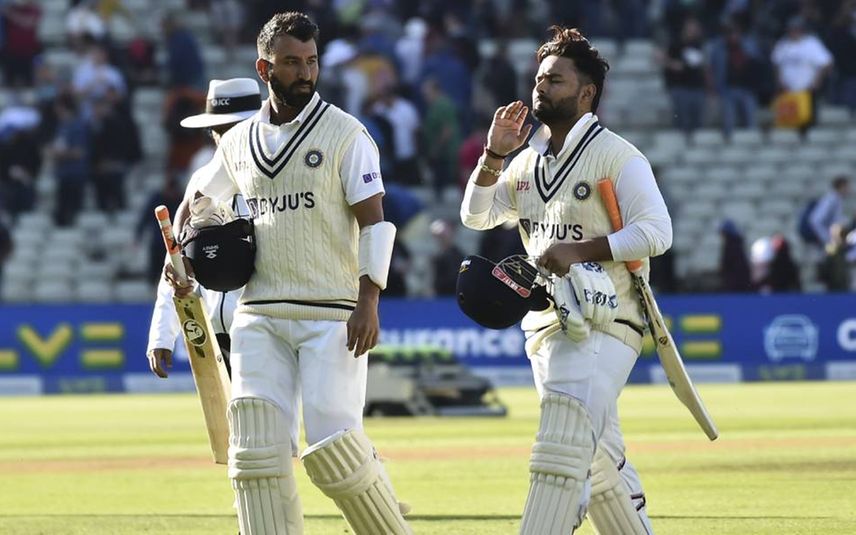 BIRMINGHAM: India extended its lead over England to 257 runs and took control of the series-deciding fifth test, despite Jonny Bairstow’s third straight century on Sunday.

Led by pacers Mohammed Siraj and Jasprit Bumrah, India bowled out England for 284 on Day 3 at Edgbaston before reaching 125-3 at stumps in its second innings. The hosts are likely to face a daunting target — even for the newly confident England team led by Ben Stokes — to even the delayed five-match series which India leads 2-1.

Cheteshwar Pujara showed plenty of patience and also survived two close lbw appeals to remain unbeaten on 50. Rishabh Pant, whose 146 led India to a strong 416 in the first innings, was not out on 30.

The pair shared an unbeaten half century stand with Pujara completing his gritty 33rd test half century in the last over of the day off 139 balls.

Earlier, Siraj used the old soft ball to perfection to take 4-66 as England was bowled out midway into the second session with Bairstow scoring 106 off 140 balls.

Bumrah has so far had a dream test debut captaincy. His 3-68 with the ball followed an unbeaten 31 off 16 balls. That included 29 runs off the bat in an over bowled by Stuart Broad on Saturday which cost England a world record 35 runs overall.

England lost only Stokes for 25 in the morning session before rain intervened for the third successive day as Bairstow’s onslaught led the home team to 200-6 at lunch.

Bairstow and Stokes had survived a tricky first half-hour against Bumrah and Mohammed Shami (2-78) after England resumed the day on 84-5. Both bowlers beat the outside edges of the batters multiple times before Bairstow launched the counterattack to perfection.

Stokes tried to break free, perhaps recklessly, and was twice dropped in quick succession when pacer Shardul Thakur (1-48) couldn’t hold onto a high ball and then Bumrah dropped his counterpart at mid-off.

However, Stokes didn’t survive for long with Bumrah holding onto a difficult catch at the same position from the next ball off Thakur.

After moving along to 16 off 65 balls, Bairstow cut loose by flicking, driving and pulling the pacers for boundaries. He also hit two big sixes off Siraj and Thakur after umpires changed the ball because it had lost its shape partly due to the brutal hitting of Bairstow.

He didn’t hold back after surviving the first 30 minutes and, just before rain took the players off the field for an early lunch, Bairstow successfully overturned an lbw ruling.

Bairstow didn’t take much time after the break to complete his hundred when he clipped Thakur onside for a boundary off the first ball after lunch. He then punched Thakur off the backfoot to the square boundary to raise his hundred on the offside as Ravindra Jadeja overran the ball and the ball rolled over for a boundary.

Siraj got the vital breakthrough when he had Bairstow caught at slip off a thick outside edge. Bairstow’s blistering knock included 14 fours and two sixes.

Siraj then sliced through the tail quickly as Sam Billings (36) was bowled, Stuart Broad got a top-edge off a sharp bouncer and Matthew Potts was ruled out caught in the slips by the television umpire in what appeared a controversial decision.

England hit back very early in India’s second innings when James Anderson (1-26) struck off his third delivery and had Shubman Gill (4) caught in the slips before India went to tea at 37-1.

Hanuma Vihari (11) attempted a hard drive against Broad (1-38) early in the last session and was caught by Bairstow.

Virat Kohli, who hasn’t scored a test century since his 136 against Bangladesh at Kolkata in 2019, started off confidently with his trademark cover-driven boundary. But he was undone by Stokes’ extra bounce and was dismissed for 20.

Kohli couldn’t leave the ball as it brushed off his gloves and Root took a brilliant one-handed reflex catch after it bounced off wicketkeeper Billings' gloves.