India show intent for fight, reach 194 for 5 at tea 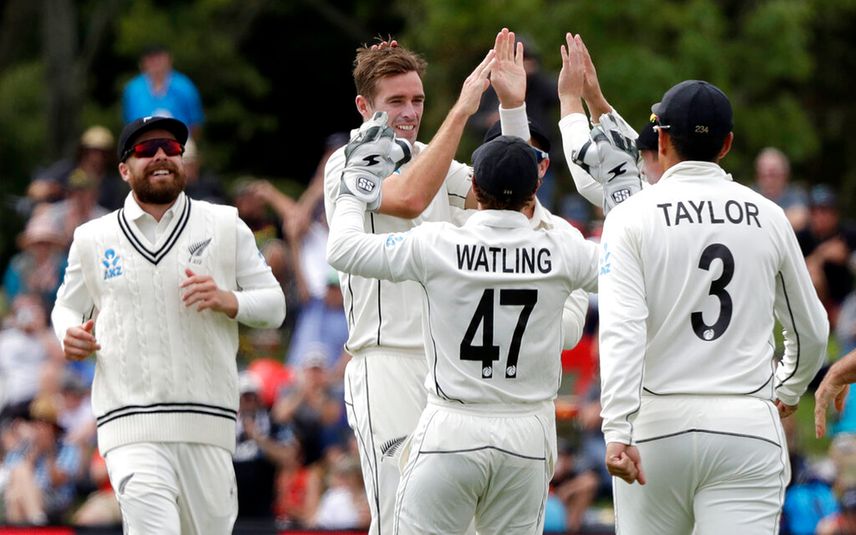 Prithvi Shaw's attacking half-century was complemented by seasoned Cheteshwar Pujara and gutsy Hanuma Vihari's contrasting knocks as India reached 194 for five at tea on the opening day of the second Test.

While Shaw counter-attacked for a quickfire 54 off 64 balls, Pujara showed his customary patience (53 batting off 135 balls) in company of a calm Hanuma Vihari (55 off 70 balls) with India displaying both intent and guts to fight it out on a seamer-friendly wicket.

Pujara and Vihari added 83 runs for the fifth wicket after India were in dire straits losing skipper Virat Kohli (3) and his deputy Ajinkya Rahane (7) to some top quality seam bowling from Tim Southee (2/38).

From 80 for 1, India slumped to 113 for four just after lunch before the Pujara-Vihari pair fought back with lot of vigour.

The Andhra batsman counter-attacked Neil Wagner's (1/29) short balls before being dismissed by one such delivery at the stroke of tea.

Earlier, put in to bat on a green-top, Indian batsmen, especially Shaw, got value for his shots as his 54 off 64 balls had eight fours and a hooked-six off Wagner.

A rush of blood just after reaching his half-century brought about his downfall.

Shaw lunged into a drive to an over-pitched delivery from Kyle Jamieson (1/35) and Tom Latham at second slip plucked a one-handed stunner from thin air.

Other opener Mayank Agarwal (7) wasted a DRS as he was plumb in-front to an incoming delivery from Trent Boult (1/51).

The 50-run stand between Shaw and Pujara was dominated by the talented Mumbaikar, who hit some delightful drives off Southee and Colin de Grandhomme.

The bounce and carry made it easier to hit on the rise and Shaw's improved footwork saw him drive elegantly through the covers.

There were square drives and a few on-drives while he also played and missed a few. He did live dangerously but more importantly had the scoreboard ticking even as Pujara was stuck at the other end.

Wagner wasn't used much with the semi-new kookaburra ball and it was his bouncer that Shaw hooked well enough to evade a 6 feet 8 inch Jamieson for maximum. PTI