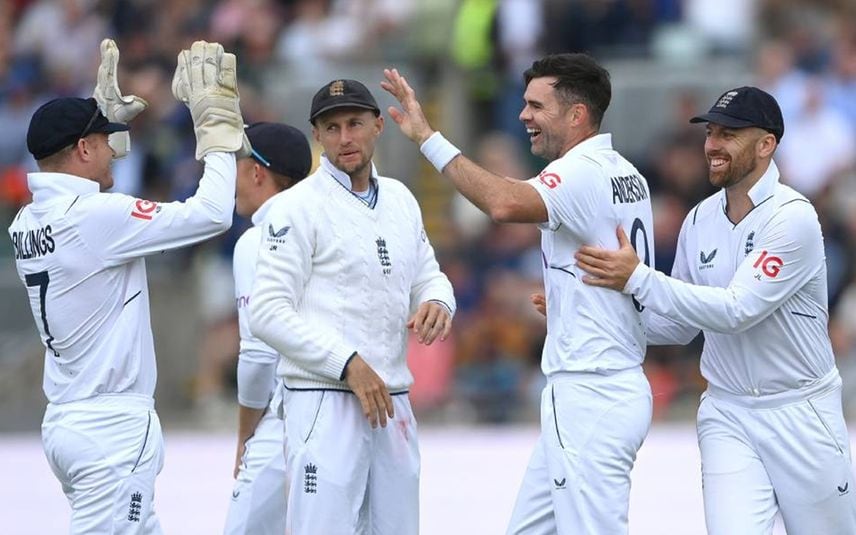 BIRMINGHAM: Fast bowler James Anderson struck twice under favorable conditions as India reached 53-2 at lunch on the first day of the series-deciding test match on Friday.

The match is part of the four-test series which India leads 2-1, but was postponed last year after several Indian players tested positive for the coronavirus ahead of the decisive test.

The virus hit the Indian team again on the eve of the test match when regular skipper Rohit Sharma was ruled out and Jasprit Bumrah became the first fast bowler since Kapil Dev to lead the side as interim-skipper.

The luck didn’t favor the new India skipper at the spin of the coin as he lost the toss and England didn’t hesitate to bowl under overcast conditions.

The veteran pair of England fast bowlers – Anderson and Stuart Broad – time and again tested both opening batters Shubman Gill (17) and Cheteshwar Pujara (13) with their nagging line and length and Matthew Potts also extracted lots of bounce off the wicket.

Gill hit two boundaries in Broad’s one over, but with the ball zipping and bouncing ominously he finally succumbed to Anderson’s brilliance when he edged in the second slip.

Hanuma Vihari survived a confident lbw appeal against Anderson off the first ball and was unbeaten on 14 at the break as rain arrived nearly 20 minutes before lunch. Former captain Virat Kohli was not out on 1 off the six balls he faced.

Crawley should have had his third catch, but couldn't hold onto a sharp one-handed catch of Vehari in the second slip which could have earned Potts his first wicket.

Broad came close to his 550th test wicket but Pujara, who replaced Rohit upfront in the playing XI, successfully overturned a caught behind ruling off the DRS. However, Pujara didn't last long against Anderson's relentless seam and swing as the fast bowler struck in his second spell when Crawley took his second catch in the slip cordon.

England is on a high under the new team management comprising captain Ben Stokes and coach Brendon McCullum as it annihilated New Zealand 3-0 in the recent test series with their aggressive batting, led by Jonny Bairstow’s masterful power-hitting.