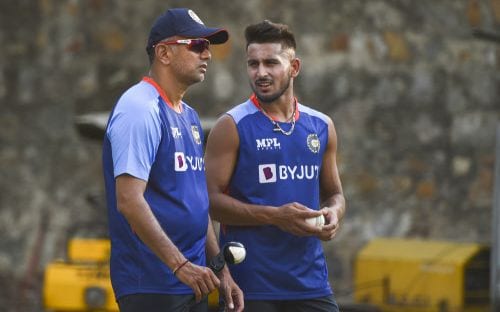 Dublin [Ireland]: Team India skipper Hardik Pandya won the toss and opted to bowl first against Ireland in the first T20I of the two-match series here at Malahide Cricket Club Ground on Sunday.

For Men in Blue, Umran Malik received his maiden cap while for hosts, Conor Olphert is going to make his debut.

"A dream come true moment!! Congratulations to Umran Malik who is all set to make his T20I debut for #TeamIndia He gets No.98," BCCI tweeted ahead of the match.

After a brief week of lull, Team India will once again take the yard as they collide with the Irish forces in the first T20I of a two-match series.

The young team that defied the likes of South Africa from a triumph on the Indian soil despite the visitors taking an early 2-0 lead would be squaring off with the Irish forces, with an eye on the T20 world cup scheduled for later this year.

India will be riding high on the momentum that they managed to garner after the fourth assignment of the fray where the Indians turned around the game on its head, courtesy of a blitzkrieg from Dinesh Karthik while Avesh Khan cleaned up the South African resistance with a solid four-fer display.

Despite being an associate nation, Ireland has proven over the years that they are one team who should not be taken lightly. They left a trail of carnage in the recently concluded World T20 Qualifiers where the only two losses that they would suffered were against the UAE.

Hardik Pandya, India captain at the time of toss said: "We are going to bowl. We would have loved to bat, but looking at the weather we felt bowling would be better. Nice to be in Ireland. Have fans here and feels like playing at home."

Talking about the captaincy, Pandya said: "Absolute honour to lead India. Any cricket who starts playing dreams of leading the country and I am very lucky to be leading my country. My role is simple. Just back them and ask them to play with freedom. Umran makes his debut."

While, Andrew Balbirnie, Ireland captain said: "Probably would have bowled because of the weather around. Guys are excited for this series. Really important to play against one of the best teams in the world. Conor Olphert is going to make his debut today."