This was India's third day-night Test match victory on home soil in as many matches. 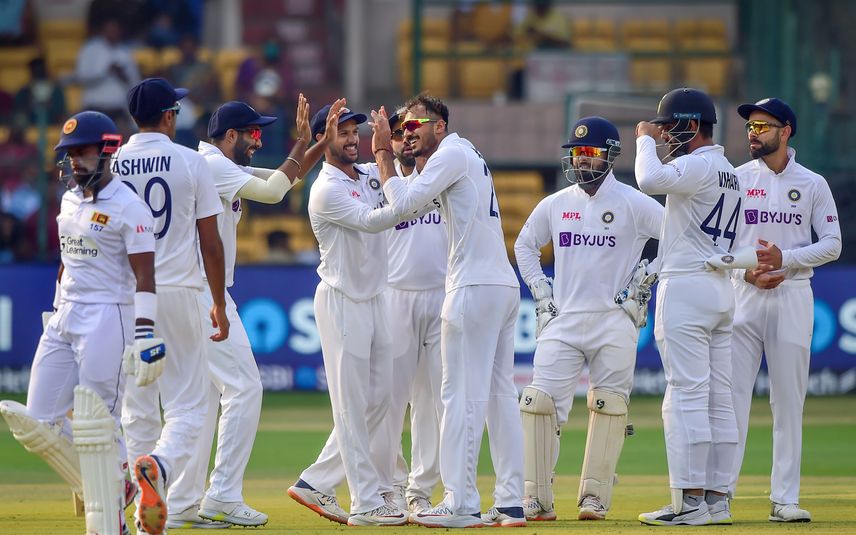 India's Axar Patel with teammates, celebrates after taking the wicket of Sri Lanka's Charith Asalanka during the third day of 2nd test cricket match between India and Sri Lanka at Chinnaswamy Stadium, in Bengaluru. Photo: PTI

Bengaluru (Karnataka): India scored an emphatic 238-run victory against Sri Lanka on Monday as they bowled out the visitors for 208 in the second innings of the second Test at the M Chinnaswamy Stadium here. Rohit Sharma-led team wrapped up the Test match inside three days and have swept the two-match series 2-0.

Charith Asalanka joined his skipper but could not do much as he became the second victim of Axar Patel, caught by Rohit Sharma for 5 to put Lankans in further trouble at 180/6.

Karunaratne kept the fight on as he went on to notch up his century and along with Lasith Embuldeniya took Sri Lanka's total beyond the 200-run mark.

Jasprit Bumrah was again introduced into the attack and the pacer cleaned up the centurion Karunaratne for 107 with the visitors losing their seventh wicket for 204. In the next over, Lasith Embuldeniya was dismissed leg before wicket for 2.

Bumrah struck for the third time in the innings as he cleaned up tail-ender Suranga Lakmal for 1 picking up his eighth wicket of the match. Ashwin delivered the final blow as he dismissed Vishwa Fernando for 2 to bowl out visitors for 208. Ashwin finished with 4 wickets in the second innings.

This was India's third day-night Test match victory on home soil in as many matches.

Earlier in the day visitors resumed the second innings at 28/1 as Karunaratne and Kusal Mendis batted well to take the team's total beyond the fifty run mark. Mendis was the more aggressive of the two as he went on to score his half-century off just 57 balls.

In the next over Jadeja struck as he cleaned up Angelo Mathews for 1 to leave Sri Lanka in a spot of bother at 98/3.

Dhananjaya de Silva walked in to bat and he along with his skipper Karunaratne took the team's total beyond the 100-run mark. Ashwin struck for the second time in the innings as he dismissed Dhananjaya de Silva caught in the short leg for 4 to put visitors in further trouble at 105 for 4.

Dickwella walked in to bat after de Silva's dismissal as Karunaratne went towards his half-century.