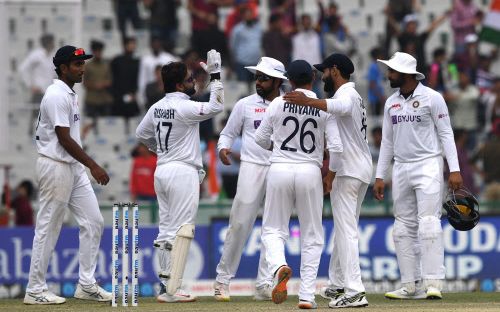 Mohali: India completed a comprehensive innings and 222-run victory over Sri Lanka inside three days in the first Test to go 1-0 up in the two-match series here on Sunday.

All-rounder Ravindra Jadeja shone with the bat and ball as he snared nine wickets in the match to complement his 175 not out.

India shot Sri Lanka out for 178 in 60 overs in their second innings after the visitors were asked to follow-on.

Sri Lanka had scored 174 in their first innings in reply to India's 574 for 8 declared.

Sri Lanka continued with their batting flop show as they did just a tad better than their first innings score with wicketkeeper Niroshan Dickwella top-scoring with 51 not out. Their best partnership was the 49-run stand for the fourth wicket between Angelo Mathews (28) and Dhananjaya de Silva (30).

The second and last Test -- a day/night affair -- will start on Saturday in Bengaluru.

Rahul to miss Zimbabwe tour due to delayed recovery