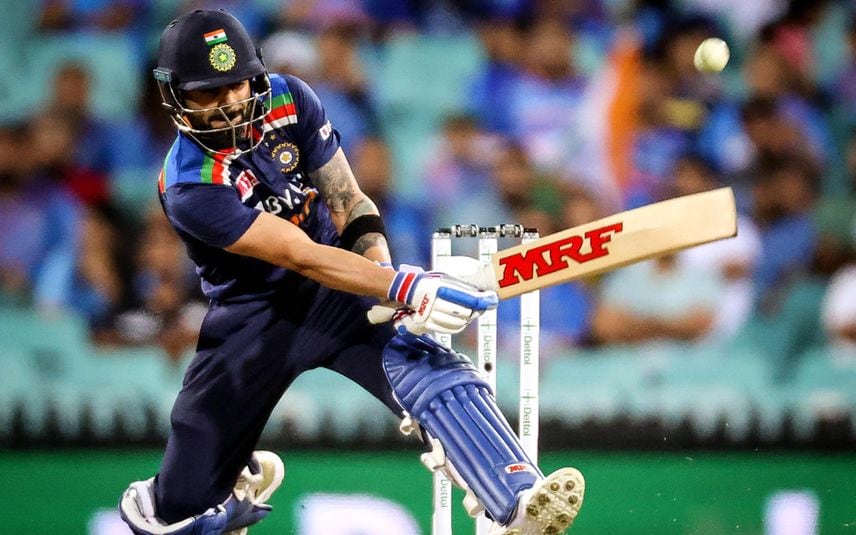 India's captain Virat Kohli plays a shot over the boundary line for six runs during the second T20 cricket match between India and Australia | Photo: AFP

Sydney: India sealed the T20 International series against Australia with a game to spare after a swashbuckling Hardik Pandya finished what Shikhar Dhawan had set out to achieve with a scintillating 36-ball 52 in the second and penultimate match here on Sunday.

The visitors thus avenged their 1-2 ODI series loss, chasing down a challenging 195-run target set by the home side. They won the opener in Canberra by 11 runs on Friday.

Needing 25 of the final 12 balls after fetching 12 in the 18th over, Pandya brought the equation down to 14 in the last over with two fours. The all-rounder then hit two sixes to seal the match in India's favour.

Pandya remained unconquered on 42 off 22 balls.

India were off to a sedate start with no boundaries coming in the first two overs. But fours and sixes rained from the willows of Dhawan (52) and KL Rahul (30) once the duo got their eye in.

Rahul capitalised on a free hit by smashing Andrew Tye for a maximum over extra cover, India's first boundary of the innings.

Dhawan got himself a couple of boundaries and a six off Glenn Maxwell as India scored 34 runs in two overs to gain the momentum they were looking for.

The seasoned Dhawan, despite coming down the wicket early, managed to pull Sean Abbott over deep mid-wicket for another six.

Australia got their first breakthrough when Rahul gave a simple catch to Mitchell Swepson at deep point. But India had still managed a strong start, reaching 60 for one at the end of the Powerplay.

Having played some fine shots, Dhawan top-edged an attempted slog sweep off leg-spinner Adam Zampa to give Australia their second wicket.

Sanju Samson got out after a 10-ball 15 but it was debutant Daniel Sams, who gave the hosts their biggest breakthrough when he had Virat Kohli caught behind for a well-made 24-ball 40.

Earlier, stand-in skipper Matthew Wade led from the front with a blistering half century and powered Australia to a strong total after a fairly commanding performance with the bat.

Leading the side in the absence of an injured Aaron Finch, Wade smashed 58 off 32 balls while Steve Smith made a breezy 38-ball 46 after India opted to field.

For the visitors, T Natarajan finished with fine figures of 2/20 in his four-over spell. Australia accumulated 62 runs in the last five overs after a few tight middle overs.

Wade started the Australian innings on a rousing note, launching into a flurry of boundaries and a six against an Indian attack that lacked in experience with the exception of Yuzvendra Chahal.

Bowling the second over, off-spinner Washington Sundar was hoicked over deep square leg for a six as the hosts looked to set a big total.

Shardul Thakur was welcomed into the attack with a boundary, smashed off the hip by the in-form Wade.

Sundar conceded 15 runs in the fourth over and then Wade scored 12 off Thakur as the hosts raced past 50 in the sixth over at the Sydney Cricket Ground whose shorter square boundaries aided batsmen.

However, the introduction of Natarajan into the attack saw Australia losing their first wicket in the form of D'Arcy Short.

Least perturbed by the dismissal, Wade continued to bat aggressively and brought up his fifty off just 25 balls with a boundary off Chahal.

But the stand-in skipper got out in a comical fashion, run out after Kohli dropped another absolute sitter at cover, his second in two days.

As the ball headed towards Kohli, Wade gave up, walked towards the dressing room and even though he was alerted by Steve Smith of the drop, he had backed up too far by that time.

Before that, Pandya had dropped Wade.

However, the Australian onslaught continued unabated as the duo of Smith and Glenn Maxwell kept dealing in fours and sixes.

Even as Smith played some innovative shots, Maxwell, in his characteristic fashion, smashed Chahal for two sixes before falling to Shardul Thakur's change of pace.

Moises Henriques joined Smith and the two carried on in the same vein before falling to Chahal and Natarajan respectively. PTI

Ind Vs SL: Ishan Kishan hospitalised after being hit on head in 2nd T20I

Couldn't have asked for a better debut, says Harshal after his match-winning performance