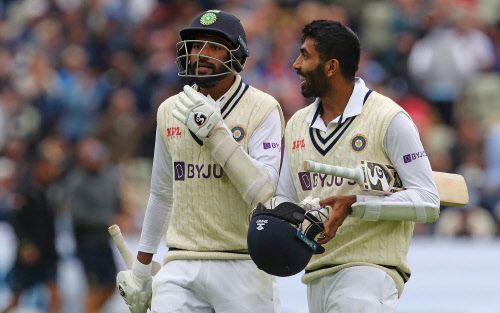 Birmingham: India were all out for 416 in their first innings on the second day of the rescheduled fifth Test against England here.

Resuming on 338/7, India added 78 runs for the loss of the remaining three wickets during the opening session of the day.

The overnight pair of Jadeja and Mohammed Shami (16) added 33 runs in 40 balls before skipper Jasprit Bumrah played an excellent cameo, blasting an unbeaten 31 off 16 balls to take India across the 400-mark.

Bumrah smashed two sixes and four fours to amass 35 runs off Stuart Broad and create a world record for scoring most runs in an over in Test cricket.

For England, James Anderson was the most successful bowler with 5 for 60, which included the wicket of Jadeja. Broad (1/89) dismissed Shami for his lone wicket, while Matty Potts (2/105), Ben Stokes (1/47) and Joe Root (1/23) were the other wicket-takers.

Rishabh Pant opens up about his talk with Ravindra Jadeja before smashing ...