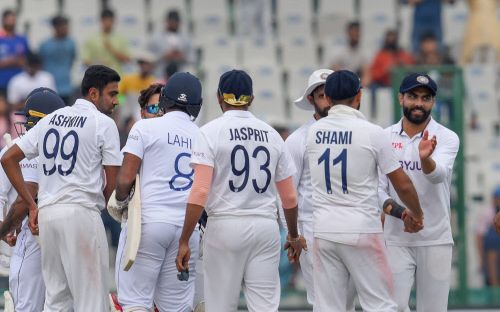 Bengaluru: The Indian team will be playing their third Day-Night Test on home soil when they take on Sri Lanka in the second and final Test match of the series here at the M Chinnaswamy Stadium.

"We are playing a pink ball test after a long time. We practised under lights. We addressed the adjustments we need to make during the Pink ball Test," said India vice-captain Jasprit Bumrah in the pre-match press conference.

The last time India played a Day-Night Test match with the Pink ball was against England in Ahmedabad in February 2021.

"As I told you before there are mental changes we have to make because you do not play a lot of Pink Ball cricket. All these things we are still very new to this format like playing under light, fielding and bowling with Pink Ball are things we need to get used to and we keep all of these things in mind while in training sessions. We have not played with Pink ball much at junior level as youngsters. The adjustment depends from person to person. There is no set parameter. The red ball swings in the morning more while the Pink ball in the evening. As far as catching is concerned we practice so that we can adjust to it," explained Bumrah.

For the Day-Night Test match, the players also have to adjust to a different time of play as the match starts in the afternoon and ends late in the evening.

"When the match ended we had an optional session in Mohali. The times are different. The sleep patterns are different. We practice so that we can adjust to that timing pattern," said Jasprit Bumrah.

With the match being played under lights it is still not clear whether India will play three seam bowlers or three spinners.

"We had a look at the surface yesterday but today we'll take a closer look at the pitch. After that we will have a better idea if we want to go into the match with three seamers or three spinners," the Indian vice-captain told.

All-rounder Axar Patel, who has recovered from a shin injury that forced him to miss the South Africa tour and the T20I series against West Indies, returned to the Indian set-up replacing left-arm chinaman bowler Kuldeep Yadav for the second Test against Sri Lanka.

"Axar Patel has added a lot of value whenever he has played, has contributed a lot and offers a lot in all departments. He was injured but he jumps straight back in when he's fit. We will discuss our combination but of course, he is valuable," said Bumrah about Axar Patel's comeback.

"We have not removed Kuldeep Yadav from the team. He has been in the bio-bubble for a long time and hence he has been released. Staying in a bubble is not easy. The mental aspect is important. After this he will again be in the bio-bubble during the IPL," added Bumrah.

When it comes to Pink Ball Tests, India have played two D/N matches on home soil winning both inside three days in Kolkata and Ahmedabad against Bangladesh and England respectively. This will be India's fourth Pink ball Test overall. ANI