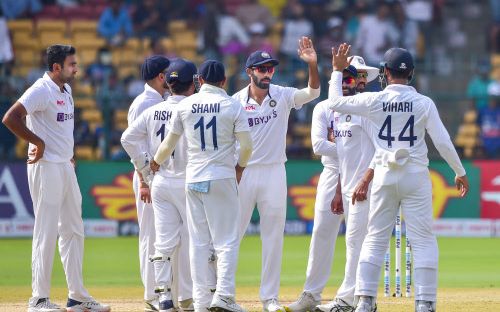 Bengaluru: The hosts are just six wickets away from victory as they dismissed three batters to leave the visitors at 151/4 going into Tea on Day-3 of the second Test being played here at the M Chinnaswamy Stadium.

Resuming Day-3 at 28/1 Sri Lankan captain Dimuth Karunaratne and Kusal Mendis batted well to take the team's total beyond the fifty run mark. Mendis was the aggressor of the two and he went on to score his half-century off just 57 balls.

Ravichandran Ashwin finally broke the partnership dismissing Mendis for 54 stumped by wicket-keeper Rishabh Pant, and the Lankans lost their second wicket for 97.

In the next over Jadeja cleaned up Angelo Mathews for 1 to leave Sri Lanka in a spot of bother at 98/3.

Dhananjaya de Silva walked in next and he along with skipper Karunaratne took the team's total beyond the triple-figure mark.

Ashwin struck for the second time in the innings as he dismissed Dhananjaya de Silva caught at short leg for 4 to put the visitors in further trouble at 105 for 4.

Wicket-keeper batter Niroshan Dickwella walked in after de Silva's dismissal while at the other end Sri Lankan skipper Karunaratne had scored a half-century.

Dickwella and Karunaratne took their team's total beyond the 150-run mark. Both ensured that there was no further damage as Karunaratne remained unbeaten on 67 while Dickwella was not out on 10 with Sri Lanka still needing 296 more runs to win with six wickets in hand.