On debut, Shreyas Iyer shows the way as India score 258/4 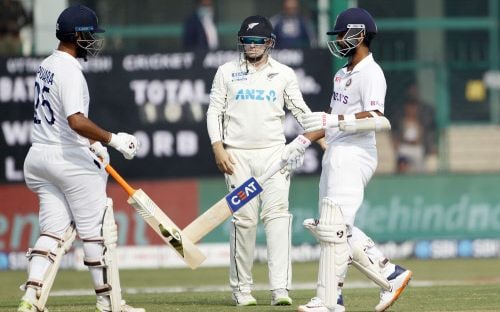 India's skipper Ajinkya Rahane and Cheteshwar Pujara during the Day-1 of the 1st Test match between India and New Zealand, at Green Park International Stadium, in Kanpur on Thursday. | Photo: ANI

Kanpur: Debutant Shreyas Iyer was guts, aggression and flair rolled into one during an unbeaten knock of 75, which was nothing short of a baptism by fire, as India ended on 258 for four on the first day of the opening Test against New Zealand here on Thursday.

On a pitch that had variable bounce and didn't offer enough pace off it, Iyer put his best foot forward while facing 136 balls, hitting seven boundaries and two sixes on his very first day in office in the longest format.

But at 144 for 4, Iyer took charge with senior all-rounder Ravindra Jadeja (50 batting, 100 balls) for company as they resurrected the innings, at the same time batting with a lot of intent to keep the scoreboard ticking.

Jadeja scored his 17th Test fifty and did his trademark sword celebrations much to the delight of the crowd.

One doesn't know if Sunil Gavaskar, while presenting the India Cap to Iyer, mentioned about a very special player to him. Someone, who had announced his arrival at this very ground 52 years back in 1969 against Bill Lawry's Australia.

There are very few in Indian cricket who have received unadulterated love like Gavaskar's illustrious brother-in-law Gundappa Viswanath. His hundred on debut at this very ground is a part of Indian cricket's most warmly recounted folklores.

They say every blade of grass at Green Park had felt punch in Viswanath's shots and remembers him forever.

Doesn't matter whether one hails from a T20 generation, what ultimately matters is sound temperament to succeed at highest level.

Iyer proved that all those hard yards put in during Ranji Trophy and the 1000 plus runs season that he once had, haven't gone in vain.

It did help that he wasn't just looking to survive but score as there were pull shots, lap scoops, drives down the ground and some imperious cut shots.

There was Mumbai's 'khadoos' schooling in the manner he played Jamieson and Southee with caution.

Iyer had it all and it was on display.

It did help that Patel (21-6-78-0) and off-break bowler William Somerville (24-2-60-0) didn't find any ways to assist the pressure that was time and again created by the two pacers.

Patel, who literally bowls with a half-step-full-jump run-up, either pitched too short or gave the ball enough air to give batters the option to either cut him or come down the track to drive him off length.

Shubman Gill (52 off 93 balls) did that with elan before perishing on a day when a hundred was there for the taking and he looked good to reach the landmark before Jamieson exposed the gap between his bat and pad.

But there was no stopping Iyer, who save a strong leg before appeal by Sommerville that turned out to be an Umpire's Call, was ready to wait for the loose deliveries.

The 113-run unbroken partnership between Jadeja and Iyer might prove to be the winning one in the final analysis.

That's because if India's batters found it hard to score freely on a two-paced track, the Black Caps' willow wielders, with very little experience of dealing with Ravichandran Ashwin, Axar Patel and Jadeja in these conditions, will find it doubly difficult.

If Iyer's debut innings was the brightest spot, comeback man Gill's taking the attack back to the opposition camp in the first session couldn't be seen in isolation either.

It was a stage that was set by Gill and had Jamieson not bowled a beauty with the old ball, he should have completed what was expected to be his maiden Test hundred.

But more importantly what Gill and Iyer did on the day was to send another warning signal for Pujara and Rahane, who are now on borrowed time.

Rahane was done in by low bounce when he was expecting the ball from a near 7 feet tall Jamieson to rear up. With 12 Tests without a big score (India might not bat twice), Rahane's record is not reading too well for a stand-in skipper.

Similarly, Pujara being stopped from scoring by spinners, whom younger players like Gill and Iyer played freely, is an indicator that he either has to reinvent himself or there is trouble in waiting. (PTI)