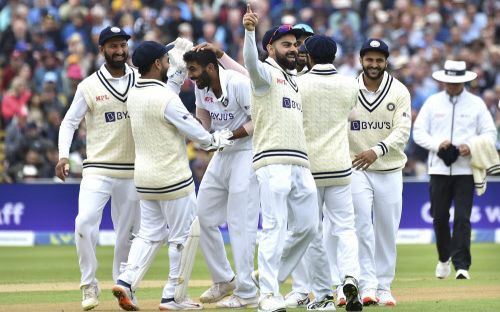 Birmingham: England were 60 for three when tea was taken amid another interruption brought about by rain on the second day of the rescheduled fifth Test against India here.

Joe Root and Jonny Bairstow were batting on 19 and 6 respectively.

Following up his world record-breaking carnage with the bat, the visitors' fast-bowling captain Jasprit Bumrah led from the front in his primary job, taking all the three English wickets to fall in their first innings.

This was after Bumrah bludgeoned a hapless Stuart Broad for 29 runs to create a world record for maximum runs off a single over in Test cricket, beating the legendary Brian Lara's feat by one run.

Bumrah's blitzkrieg was an icing on the cake after Ravindra Jadeja notched his third Test century, following in the footsteps of Rishabh Pant who got one on the opening day, lifting India to 416 all out from 98 for five.

Farewell To Cricket: Indian women gear up for memorable Lord's dance for ...

India have a strong team, should win the World Cup: Kaif

Thakur, Sen star in Sanju-led India 'A' win over New Zealand 'A' in first ...