In its humdinger of a victory against West Indies in the first ODI at Queen's Park Oval, India got many things right. 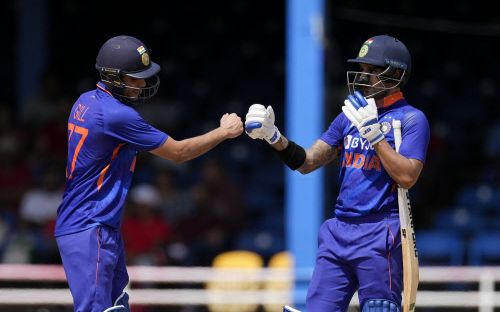 Port of Spain: In its humdinger of a victory against West Indies in the first ODI at Queen's Park Oval, India got many things right.

Like the top-order batters, captain Shikhar Dhawan, who fell three runs short of a century, his opening partner Shubman Gill and number three batter Shreyas Iyer scoring half-centuries. Then, there was Mohammed Siraj defending 15 runs in the final over and Yuzvendra Chahal backing his strengths to pick 2-58 in the middle overs.

Now, with the visitors 1-0 up in the three-match series, they would be seeking to improve on their middle-order meltdown, where they slipped from 213-1 in 33 overs to end up with 307-8 in 50 overs, a total way below the mark projected in the first half of their innings. In the second match on Sunday at the Queen's Park Oval, India will be aiming to improve on the late wobble and seal the series to make Wednesday's match a dead rubber.

Amongst the boxes India ticked on Friday, the opening stand between Dhawan and Gill was a huge one. There had been a question mark on the stand-in skipper's form after he looked a little rusty in the ODI series against England.

But Dhawan put all those questions to rest with a fantastic 97, where he played the second fiddle to a glorious Gill and after the youngster fell, he maintained the flow of attacking batting for India. On the other hand, Gill justified his selection ahead of Ruturaj Gaikwad and Ishan Kishan for a fluid knock in what was his maiden ODI fifty.

Iyer took his time to find a rhythm but reached his fifty. From there though, the West Indies bowlers mixed their line and lengths and varied their pace as Sanju Samson, Suryakumar Yadav, Deepak Hooda and Axar Patel didn't get big knocks using the platform laid by Dhawan, Gill and Iyer.

The late wobble will be something India will be keen to avoid against Alzarri Joseph, Jayden Seales, Akeal Hosein and Gudakesh Motie. With the ball, Siraj was the standout, with his yorkers and holding his nerve in the final over, so was Chahal.

West Indies, on the other hand, are on a seven-match losing streak in the format. But they will be delighted with the fact that they batted for full 50 overs, something which they have consistently struggled with and came close to achieving the highest chase at Queen's Park Oval. Kyle Mayers marked his return from injury with a splendid 75 while Brandon King made a good 54.

West Indies will be pleased by the fact that Shamrah Brooks, captain Nicholas Pooran, Hosein and Romario Shepherd chipped in with batting contributions to last their full quota of overs with the bat. Their catching was superb too though they may look at improving on some misfields.

Sunday will see both teams step up on the field, with fans expecting a thrilling cl'sh again at Queen's Park Oval.