After rain caused the first T20I between India and New Zealand at Sky Stadium to be washed out, it may again play a spoilsport when the two teams will be playing in the second match at Bay Oval in Mount Maunganui on Sunday. 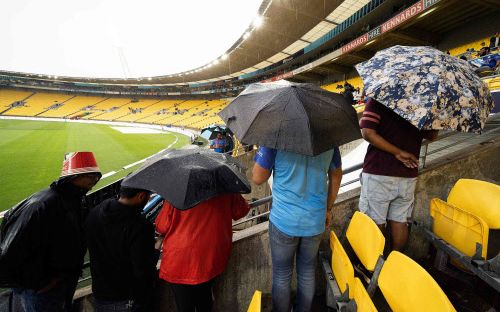 Mount Maunganui: After rain caused the first T20I between India and New Zealand at Sky Stadium to be washed out, it may again play a spoilsport when the two teams will be playing in the second match at Bay Oval in Mount Maunganui on Sunday.

Though New Zealand skipper Kane Williamson was hopeful of sunshine coming in Sunday's sell-out match at his hometown, that may not be the case. With rain predicted for all day and precipitation levels between 40-97 per cent, there is a possibility of rain again halting India and New Zealand's quest for rebuilding their T20I sides.

One would be hoping that Rishabh Pant gets a decent run as an opener against New Zealand. Pant, who burst on the scene with blistering performances in IPL 2016 just after catching everyone's eye with his exploits in U19 World Cup earlier that year in Bangladesh, was largely in and out of initial playing eleven from Asia Cup till the Men's T20 World Cup as India preferred finishing touches of Dinesh Karthik.

But now with Karthik not in the squad for this series, one could see Pant opening the batting as India search for batters who can given them a flying start in power-play. But with Ishan Kishan and Shubman Gill, uncapped in the T20I format, as the obvious looking opening options, it should be interesting to see the role clarity which India will give to left-handed Pant, who hasn't cracked the T20I code yet, as compared to Tests and ODIs.

Hardik Pandya will be itching to show his leadership skills as the clamour grows for him to be made India's T20I captain till 2024 T20 World Cup, in a bid to change the side's fortunes in the format. His New Zealand counterpart, Williamson, will be keen to improve his strike-rate and usefulness in the shortest format of the game.

Traditionally, Bay Oval has been a high-scoring ground for T20Is. All of this can happen in front of a sold-out crowd provided the rain stays away for cricket to happen.