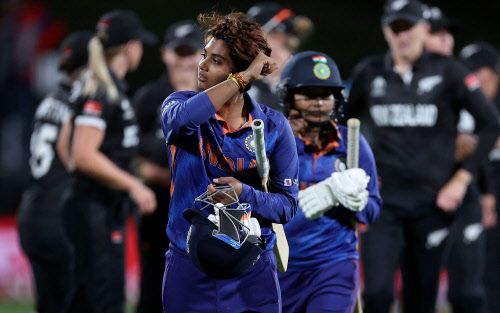 India, who had opted to bat second in the hope of dew aiding them, were all out for 198 in a chase where nothing went right for them, barring Harmanpreet Kaur's 71.

Chasing 261, Frankie Mackay's off-spin and pace from Jess Kerr kept India on a tight leash from the word go. The duo were bang-on with their line and length and didn't offer Smriti Mandhana and Yastika Bhatia any width. Smriti, whose shots were mostly going to the fielders, tried to break the shackles off Jess in the sixth over.

But Jess, who came in from round the wicket, got Smriti to mistime a loft to cover. New Zealand's relentless pursuit of building the dot-ball pressure as Deepti Sharma was trapped lbw on last ball of power-play off Lea Tahuhu. The on-field umpire gave it lbw but New Zealand took the review and got to reverse the decision in their favour.

India's too slow a start and New Zealand's disciplined bowling meant they never got the chance to break free and rotate the strike. Post-power-play, Yastika went for the push early, giving mid-off a catch off the leading edge.

Mithali Raj, dropped by cover off Lea early in the knock, stitched a laborious 47-run stand off 63 balls with Harmanpreet Kaur. But Amelia Kerr, the leg-spinner introduced from 25th over, made double strikes in the 30th over to dent India's chances of making an improbable comeback in the match.

Mithali, expecting a googly from Amelia, was stumped off a leg-break outside off-stump which she attempted to sweep. On the very next ball, Amelia bowled Richa Ghosh for a golden duck with a googly that turned in and hit top of off-stump.

Sneh Rana negated Amelia's hat-trick ball with a cut through point but didn't look comfortable at the crease. Lea, coming in her final over, bounced her out with a well-directed short ball which took the glove edge to Katey. Amidst all the ruins, Harmanpreet was waging a lone battle, pulling and sweeping hard even as Pooja Vastrakar holed out to mid-off off Hannah Rowe.

After Harmanpreet got her fifty in 54 balls, she slog-swept Hannah for two sixes over deep mid-wicket and two fours swept through square leg and fine leg to take 20 runs off the 43rd over. Harmanpreet's late surge came to an end at 71 when she miscued a slog to long-off off Amelia. Hayley Jensen then yorked Jhulan Goswami and got Rajeshwari Gayakwad to nick behind on successive deliveries to seal a comprehensive win for New Zealand.

Inaugural edition of Women's IPL to be held in March 2023