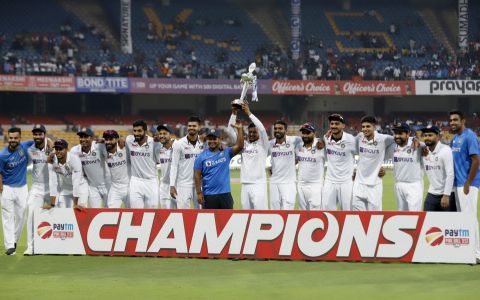 Sixteen wickets fell in the opening day and the hosts had the pink-ball contest firmly in hand with an emphatic 238-run victory inside three days.

But a subsequent International Cricket Council review found that the contest had been lopsided from the beginning.

"The pitch offered a lot of turn on the first day itself," match referee Javagal Srinath said.

"Though it improved with every session, in my view, it was not an even contest between bat and ball."

Under ICC rules, venues that receive a "below average" pitch designation are issued with a demerit point.

Demerit points remain active for a rolling five-year period, and if a venue accumulates five it is suspended from hosting international cricket for a year.

Bangalore is the second venue in as many weeks to receive the "below average" reprimand, after the Rawalpindi Cricket Stadium in neighbouring Pakistan.

At the Rawalpindi stadium, this month's first Test between the hosts and Australia ended in a tame draw -- with 1,187 runs scored for the loss of only 14 wickets. AFP