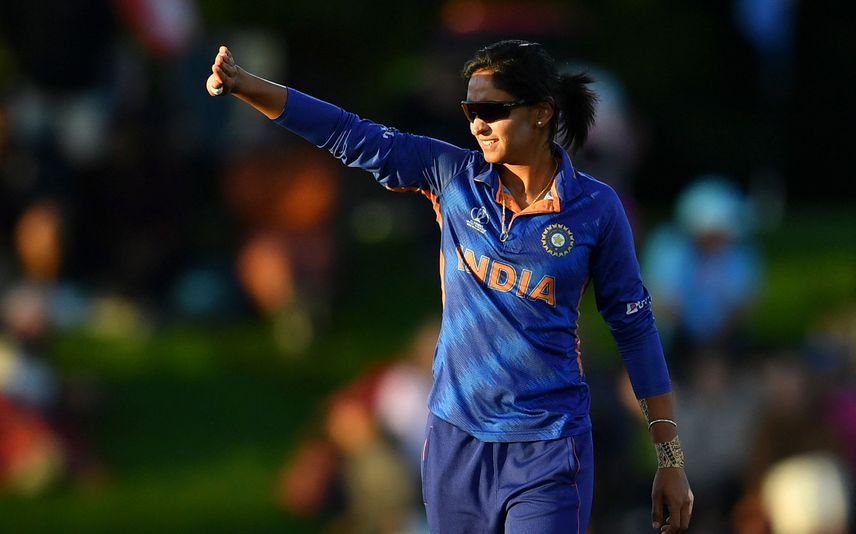 Canterbury: Captain Harmanpreet Kaur's explosive unbeaten hundred and brilliant spell from pacer Renuka Singh helped an all-round India defeat England by 88 runs in the second ODI of the three-match series at Canterbury to clinch the series on Wednesday.

With this victory, India now has an unassailable 2-0 win in the series. In the first innings, India registered a massive 333/5 in 50 overs, their highest total on English soil. Captain Harmanpreet Kaur smashed an unbeaten 143 off 111 balls with 18 fours and four sixes and had a 113-run stand with Harleen Deol, who scored 58 off 72 balls.

In chase of 334, pacer Renuka Singh (4/57) dismantled English top order. Danni Wyatt (65), Alice Capsey (39) and captain Amy Jones (39) offered some resistance temporarily, but the hosts were nowhere in contention of winning and lost the game by 88 runs after being bundled out for 245.

Chasing 334, opener Tammy Beaumont was sent packing by skipper Kaur, who ran her out, picking off from where she left while batting. Next up, it was Sophia Dunkley who became Renuka's first victim for just one run after her stumps were dislodged while going for a slog. England was left struggling at 2/12.

Emma Lamb and Capsey then kept the scoreboard ticking for a while, hitting some delightful boundaries. Just when the partnership was budding, Renuka took her second wicket, trapping Lamb leg before wicket for 15 off 18 while she attempted a flick. England had lost their three wickets for 47 runs.

Wyatt and Capsey then joined hands to put the chase on right track. At the end of 10 overs and the powerplay, England stood at 66/3, with Wyatt (14*) and Capsey (29*) at the crease.

The duo then started scoring runs at a decent rate, with at least one boundary an over for a while, helping their side cross 100 runs and bringing up their 50-run stand as well. Their 55-run stand was done away with by Deepti Sharma, who sent back Capsey for 39 off 36 balls after she was caught by Shafali Verma.

Skipper Amy Jones then joined Wyatt. Wyatt hit an elegant half-century and helped her side reach the 150-run mark. The duo had stitched a stand of 67 runs and their chase hit another roadblock. Renuka got her third victim in Wyatt for 65 off 58, tearing into the batter's middle stump with a brilliant yorker. At this point, half of the English side was back in the hut for 167.

Hemalatha took the scalp of Jones (39) just a few balls later, making matters worse for England. Renuka continued to run riot over the English line-up, dismissing Sophie Ecclestone for just one after being caught by Deol at deep-midwicket. This was her fourth wicket of the match. Freya Kemp was run out just few balls later, sinking England to 183/8.

Charlie Dean and Kate Cross then helped the hosts cross the 200-run mark, saving their side from utter humiliation. The 28-run stand between the duo was broken when Shafali Verma trapped Cross for just 14.

Lauren Bell was the last batter to come out. With defeat almost certain, Dean and Bell swung their willows for a while before Dean was dismissed for 37 off 44 balls by Hemlatha. England was bundled out for 245 in 44.2 overs.

Renuka Singh was the leading bowler with 4/57. Hemlatha took 2/6 in two overs. Shafali and Deepti took one scalp each.

Earlier, after being invited to bat first by England, India lost opener Shafali Verma in the second over, as the batter once again failed to secure a big inning. The batter struck two boundaries in the first over and looked set for a big score but was clean bowled by Kate Cross.

Kate made an excellent start to her 50th ODI, dismissing Shafali in her first over for eight runs, leaving India at 12/1 in the second over of the match.

Yastika Bhatia made her way to the crease and stitched an important 54-run partnership with the in-form Smriti Mandhana to deny any wicket to the hosts till the 10th over, taking the score a healthy 60/1 at the 10-over mark. Both the batters kept the scoreboard ticking at a good rate, scoring boundaries regularly.

Mandhana in the process also completed 3000 ODI runs and became the fastest Indian woman to get there.

Charlotte Dean then dismissed Yastika Bhatia in the 12th over to give England a much-needed breakthrough, as the pair looked threatening to take the game away from the hosts.

Dean took a superb catch of her own bowling to dismiss Bhatia for a score of 26 from 34 deliveries and left India at 66/2 in the 12th over of the innings.

The wicket of Bhatia brought the Indian captain at the wicket. She was involved in a 33-run stand with Mandhana, before Sophie Ecclestone stuck the pad of the opener.

Smriti missed the ball while attempting a sweep, which saw her downfall in the 20th over.The southpaw played yet another handy knock of 40 runs from 51 deliveries, involving one six and four boundaries.

Indian total at the end of the 20th over was 104/3, with Harleen Deol joining the Indian captain.The duo resorted to an attacking approach and did not allow the English bowlers to settle down with their line and lengths.

Both the batters played some eye-pleasing shots and took the Indian total over the 200-run mark in the 40th over.

Kaur reached her half-century in style as she deposited the ball over the mid-wicket boundary with her signature slog sweep shot. The Indian captain clinched her 18th ODI fifty in the 37th over of the match of Dean's bowling. Her batting partner Deol also followed in the footsteps of the captain and secured her maiden ODI fifty with a conservative single towards mid-wicket in the next over.

Just as the duo was set to go bonkers in the final 10 overs, Deol played walked across the stumps and played a flick to a slower ball, but was unable to clear the fence. Wyatt standing at square leg finished the catch. Deol departed after playing a fine innings of 58 from 72 ball, including two sixes and five boundaries.

Kaur and Deol shared a 113-run stand for the fourth wicket to put India in the driver's seat.At the 40-over mark, India's score read 212/4 setting a tremendous platform for the batters to exploit the last phase of the match.

Pooja Vastrakar joined Kaur who looked determined to plunder the English bowlers at the fag end of the innings.

Vastrakar played aggressive shots along with the captain to take India past the 250-run mark in the 45th over. Both players put their foot down on the pedal and looked to score quick runs, dismantling the English attack.

India all-rounder Vastrakar lost her wicket to Freya Kemp in an attempt to score boundaries in the 46th over. Kaur kept going and notched her fifth century in ODIs with a single of Ecclestone in the 47th over. The batter scored her second century as the Indian captain.

Freya Kemp was taken to the cleaners, as gave away 26 runs in the 48th over, with both Deepti Sharma and Kaur sending the ball over the boundary four times.

The second last over of the inning yielded 17 runs as the Indian captain hit Ecclestone for a six and two boundaries.

Freya Kemp showed great heart after coming to bowl the final over, despite concerning 26 runs in her last over. However, Kaur was in no mood to let her off the hook and dealt in a similar manner as before, smashing three boundaries and a six.

The captain partnered with Deepti Sharma to absolutely unleash hell upon the English bowlers in the last four overs. The duo scored a 71-run partnership off just 24 balls to take India to their highest-ever ODI total against England.