England on 67-4, facing fight to save 2nd test against India 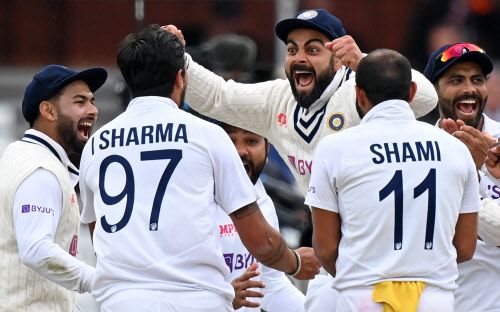 Virat Kohli celebrates with Ishant Sharma and others after the dismissal of Jonny Bairstow I Photo: AFP

London: England was facing a fight to save the second test against India on Monday after being reduced to 67-4 by tea at Lord's on Day 5, having lost both openers for ducks for the first time in a home test match.

India declared its second innings on 298-8 just after lunch, setting England an unlikely victory target of 272 in 60 overs at the home of cricket.

That task became even more implausible when, inside the first 10 balls of the innings, openers Rory Burns and Dom Sibley were dismissed for 0. That had never happened to England at home in 143 years of test cricket — although it has five times in away tests.

Haseeb Hameed, who was out first ball in the first innings in his first test since 2016, avoided a pair but only made 9 before getting trapped lbw by Ishant Sharma. And off the final ball before tea, India successfully overturned a not-out lbw decision by the on-field umpire against Jonny Bairstow (2) — again off the bowling of Ishant.

It left captain Joe Root as England's biggest hope of salvaging a draw. He was unbeaten on 33 at tea, having scored 180 not out in the first innings.

There are 38 overs remaining.

Earlier, Mohammed Shami and Jasprit Bumrah put up an unbeaten 89 runs for the ninth wicket to frustrate England, which had reduced India to 209-8 on what turned out to be fractious morning's play.

Resuming on 181-6, India had Rishabh Pant (22) and Ishant (16) dismissed by Ollie Robinson in the opening half-hour and that brought Bumrah to the middle alongside Shami.

Their aggressive, flamboyant shot-making took the game away from England, whose tactics and field-placing became questionable as its discipline turned ragged.

Verbal clashes between Bumrah and some England players — notably Mark Wood, who attempted to rough up his fellow paceman, and wicketkeeper Jos Buttler — added spice to the occasion and appeared to fire up India captain Virat Kohli watching from the pavilion balcony.

Shami brought up just his second half-century in 53 tests with a four and a huge six in successive balls before lunch, and he was 56 not out when Kohli declared soon after the players came out for the second session. Bumrah was unbeaten on 34.

Neither player had passed 10 previously in this series, which lies at 0-0 after a drawn first test at Trent Bridge.

England lost its way when Bumrah arrived, targeting him with rough stuff apparently in response to Bumrah’s aggressive bowling to Jimmy Anderson on Saturday evening. Bumrah required two mandatory concussion tests after being hit on the helmet twice.