The visitors had lost the wicket of John Campbell before stumps on Day 2 and they remain at 32/1 with Kraigg Brathwaite and night watchman Alzarri Joseph in the middle. 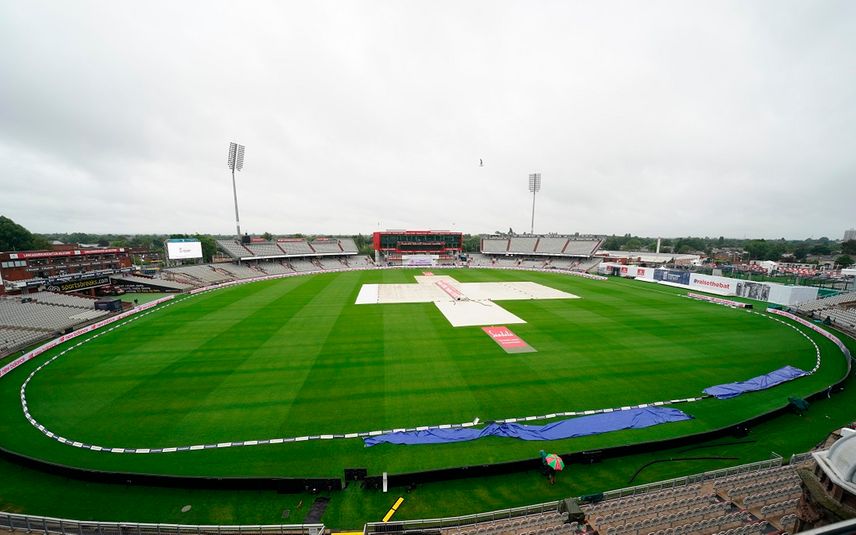 The pitch area is seen covered after rain delayed start of the third day of the second cricket Test match between England and West Indies at Old Trafford in Manchester, England, Saturday. (PTI photo)

Manchester: Play was not possible on the third day of the second Test between England and West Indies due to persistent rains at Old Trafford, Manchester on Thursday.

There was no change in the overnight scoreboard as West Indies still trail by 437 runs in the first innings. The visitors had lost the wicket of John Campbell before stumps on Day 2 and they remain at 32/1 with Kraigg Brathwaite and night watchman Alzarri Joseph in the middle.

This after all-rounder Ben Stokes and batsman Dominic Sibley slammed respective centuries and put on a mammoth 260-run stand, before the hosts declared for 469/9.

All-rounder Sam Curran said that England bowlers will have to push themselves for the hosts to secure a win now that the third day of their second Test against the West Indies at Old Trafford has been washed out. Curran feels that England have no choice but to bowl out West Indies cheaply and get them to follow on. West Indies currently trail England by 437 runs with nine wickets in hand.

"We need to bowl them out cheaply in the first innings and try and get them following on. There is no reasons why we cannot do that.

"Obviously, it's going to be a big workload for the bowlers but we are nice and fresh and hopefully we can do something for the team," he added.