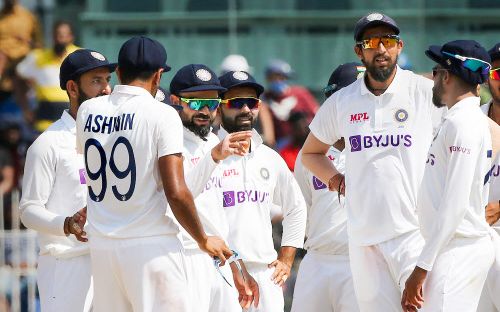 Manchester: India head into the fifth Test in Manchester starting Friday just one match away from the superb achievement of winning Test series in both Australia and England in the same year after the game got the go-ahead following a fresh coronavirus scare within the tourists' camp.

The Old Trafford fixture was under threat after reports Thursday of another Covid-19 case involving an India support staff member.

But an England and Wales Cricket Board (ECB) spokesman said later Thursday all subsequent PCR tests from the India squad had produced negative results and that the Test "goes ahead".

India head coach Ravi Shastri, bowling coach Bharat Arun and fielding coach Ramakrishnan Sridhar had already been ruled out of the trip to Manchester after testing positive for Covid-19 during the fourth Test at the Oval in London.

The tourists completed a 157-run win on Monday to go 2-1 up with just one match to play -- despite star off-spinner Ravichandran Ashwin not yet featuring in the series.

That victory followed an innings and 76-run defeat at Headingley where India, in England since losing the inaugural World Test Championship final to New Zealand in June, were dismissed for just 78.

But at the Oval, where 50 years earlier India won their first Test on English soil, Rohit Sharma scored his first overseas Test century and Shardul Thakur starred with both bat and ball.

In Australia, India recovered from being 36 all out in the series opener to win 2-1 and now lead England by that scoreline after another collapse.

"We love being written off and I think a lot of people after Leeds really stood up and said, 'Will India be able to come back?'" said India captain Virat Kohli afterwards.

"But we've shown time and time again that we are a top side...and that's because of the belief and the passion that we have in this group."

India have only twice won as many as three Tests in an away series -- 3-1 during a four-match series in New Zealand back in 1967/68 and a 3-0 clean sweep in Sri Lanka four years ago.

In Manchester, however, India must cope with the pressure of being favourites if they are to enjoy just a fourth series win in England following their 1971, 1986 and 2007 triumphs.

Meanwhile, England are on the brink of losing two Test series in a home season for the first time in 35 years.

That 1986 season was the only one where India have previously won as many as two Tests in a series in England who, then as now, also lost 1-0 to New Zealand.

Veteran seamer James Anderson and Ollie Robinson have both bowled more than 163 overs each so far this series, the pair combining for 36 wickets in the absence of the injured Stuart Broad and Jofra Archer, with all-rounder Ben Stokes missing the series for mental health reasons.

"You want to make sure you do the best thing for the player but you also don't want to go into a Test match and someone go down injured and you've got one less bowler at your disposal," said England captain Joe Root.

Jos Buttler, who missed the fourth Test for the birth of his second child, is set to return as England wicketkeeper with Jonny Bairstow, behind the stumps at the Oval, in line to miss out after Ollie Pope made 81 on his England return in that match.

So too has a lack of runs from anyone other than the England skipper, the world's top-ranked Test batsman.

Root has scored 564 runs at an average of 94, including three hundreds, this series with England's next-best contribution Bairstow's 184 runs at 26.28.

Root, in a plea to his team, asked: "Can you be the one to go and make that big score and to really put us in a position of strength, be part of a really big partnership?"