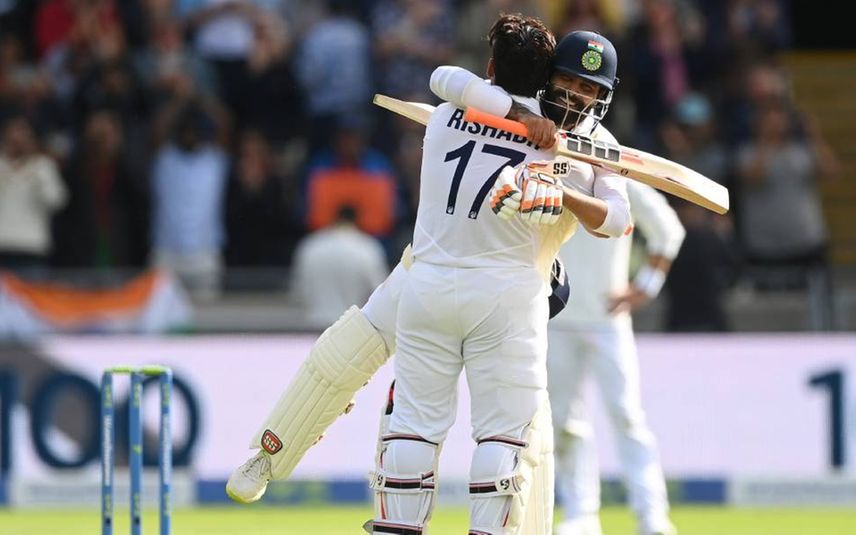 Birmingham: Rishabh Pant played one of the best knocks by an Indian Test batter in overseas conditions, a marvellous 146, as he and Ravindra Jadeja (83 not out) figured in a magnificent counterattack to propel India to 338/7 in 73 overs on day one of rescheduled fifth Test against England at Edgbaston on Friday.

At 98/5, India were in all sorts of trouble, staring at a total that would have been way less than what they expected. But Pant and Jadeja shared a counter-attacking stand of 222 runs off 239 balls, with Pant producing a knock that will be remembered for long while Jadeja played the second foil to perfection.

England were stunned, bereft of ideas as Pant was spot-on with his targets to attack and then dominate a tiring bowling unit. Just like how the New Zealand pair of Daryl Mitchell and Tom Blundell frustrated England in the recent series, Pant and Jadeja did the same in a brilliant rear-guard act. Such was the impact of Pant's 146, his fifth ton in Test cricket, that head coach Rahul Dravid co'ldn't stop himself from erupting in joy with hands aloft in the dressing room.

His knock had everything one would expect in a typical Pant knock: timing, calculated control, judicious shot selection, drives, pulls, flicks and one-handed heave, falling over but managing to clear the fence. He capitalised on the over-pitched deliveries, toyed with Leach's line and length and didn't play a shot in anger or in a sudden rush of blood.

Friday at Edgbaston was a mix of gloom and shine in terms of the weather. When it was gloomy, England made hay but when the sun came out, Pant and Jadeja basked in scintillating stroke play to put India on top. Electing to bowl first, England got very little movement as they found only 0.61 degrees of average swing in the first ten overs.

But that was of little value as Shubman Gill, who hit four attractive boundaries, looked a little tentative to balls outside the off-stump, edging a couple of them which didn't carry to the slip cordon. James Anderson's persistence bore fruit when he got rid of Gill with a ball the batter should have left on line and length, but poked at it and nicked to second slip.

Anderson struck again when his fuller ball swung late and had some extra bounce, which took the shoulder edge of Cheteshwar Pujara's bat to second slip. After a rain delay of nearly one-and-a-half hours, Hanuma Vihari, who called this venue home when playing for Warwickshire last year in County Championship, was trapped lbw by a full nip-backer from Potts.

Virat Kohli tried to leave after playing forward defence against Potta. But he was late in withdrawing the bat, which resulted in him chopping onto his stumps off the bottom edge. Shreyas Iyer was aggressive in his start, taking three boundaries, but he gloved a short ball off Anderson to leg-side and wicketkeeper Sam Billings dived to his left, completing a stunning one-handed catch.

England were on top at that juncture. But there was very little idea that despite losing half of the side even before touching the 100-run mark, India would end day one on top, thanks to Pant and Jadeja. The duo began the revival job by keeping the scoreboard ticking through strike rotation and some exquisite shots. As Anderson and Broad went fuller in their lengths, boundaries came in. Jadeja slammed two glorious on-drives and an eye-catchy off-drive, presenting the full face of the bat while Pant brought out a punchy drive through cover.

With the Dukes' ball going soft after 30 overs and with a ball change in between, the path to fightback opened for India when Jack Leach's re-introduction in the 37th over got Pant to step out and drive through long-off for a boundary. Leach dropped it short on the very next ball and Pant rocked back to pull for another boundary.

Pant brought up the half-century of his association with Jadeja by dancing down the pitch to slam a six down the ground. Six overs and a boundary later, Pant reached his fifty in 51 balls off Leach with a sublime whip coming off the backfoot to beat deep square leg easily to seal the second session in India's favour.

The duo began the final session by hitting four boundaries in the first three overs. The pick of those boundaries was Pant collecting a pair of back-foot punches through point off Potts. When Potts tried to trouble Pant with short-pitched stuff, he got in line of the ball and pulled comfortably through fine leg successive'y. Anderson and Leach's thrashing continued as Pant got his century after diving for the second run off Broad. In the same over, Jadeja pushed to mid-on for a single, reaching to his fifty.

After getting his century, Pant smacked Leach for two fours, one of which was an overthrow, and as many sixes, one of them his trademark one-handed stroke. Even Joe Root's part-time off-spin wasn't spared by Pant, carved over extra cover and a fast bouncer swivelled over fine leg for boundaries.

After Jadeja pulled Stokes through sq'are leg to bring up India's 300, Pant went for a big slog-sweep after smacking Root down the ground. But with Root firing a slower, wide delivery, the ball took the edge to the lone slip fielder. Stokes had another wicket when he bounced out Shardul Thakur. But Jadeja ensure' that another wicket didn't fall till stumps arrived, to make day one truly India's day.