Transitions in teams happen naturally, it cannot be forced: Kohli 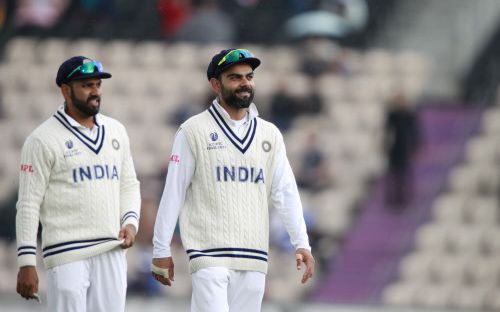 Cape Town: Indian Test skipper Virat Kohli on Monday said the transition in the team has to take place naturally over the course of time and cannot be forced.

Kohli pointed out that Cheteshwar Pujara and Ajinkya Rahane played a "priceless" knock for India in the second Test and a side needs that kind of experience players.

Pujara along with Rahane had stitched a 111-run stand for the third wicket and helped India extend their lead in the second Test.

Both batters were going through a lean patch but ended up hitting crucial fifties on Day Three of the second Test against South Africa.

"I can't pinpoint when we will have those conversations. Transitions happen naturally, it cannot be forced by individuals. The way Ajinkya and Pujara batted in the second innings, that experience is priceless for us, especially in these kinds of series," Kohli said in the virtual press conference ahead of the third Test.

"These guys have done the job in the past when you are playing overseas in tough conditions, these guys always step up with impact performances. We saw that in Australia as well and now in the last Test," he added.

India and South Africa will lock horns in the third and final Test, beginning Tuesday at Cape Town.

Indian pacer Mohammed Siraj has been ruled out of the third and final Test against South Africa, Kohli confirmed during the media interaction.

"Yes I am abosouleuty fit. Siraj is obviously recovering from the niggle, he had from the last game and at present, I do not think he is match ready to take the field," said Kohli.

"We cannot risk a guy who is not fit because we know how important is that a little niggle opening and extending into an injury could be for the team. Yes Siraj is not up to the mark but I am absolutely fit," he added.