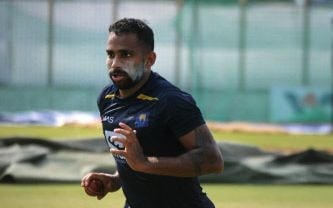 Colomb: Sri Lankan cricketer Chamika Karunaratne waits in a long queue at the fuel station to fill up his car after two days. A young international cricketer who made his international debut in 2019 is now upset by the recent crisis in the country.

Speaking exclusively to ANI on Saturday, "Luckily got it after being in a long fuel queue for two days, Due to the huge fuel crisis, I am not able to even go to my cricket practices," he said

Sri Lanka is going to host the Asia Cup 2022 in August this year. But the whole country is facing an economic crisis along with an acute shortage of fuel since independence. Even the troubled cricketer does not know what will happen, "I am coming on such a day because two important series and Lanka Premier League (LPL) matches have been announced," he said.

"Asia Cup is coming and LPL is also scheduled this year. I do not know what will happen because I have to go to Colombo and different places for the practices and do attend club season. Due to fuel shortage. I cannot go to the practices.. since two days I did not go anywhere because..I am in a long queues for petrol. Luckily I got it today but for ten thousand rupees that will go only maximum two to three days," he added.

Chamika is confident about the readiness of himself and the Sri Lankan team for the upcoming Asia Cup 2022 but shows the recent crisis concern also.

"We are ready for the Asia Cup and I think for the big event, the country will provide enough fuel. We are playing with Australia and the matches were nice. Even for the Asia cup preparation is underway," he said.

Sri Lankan cricketer Chamika also talked about the ongoing crisis. When asked if the current regime will be able to maintain peace and normalcy after the resignation of president Gotabaya Rajapaksa, he replied, "I cannot say much on it, but nothing going is going well right now. I hope that when the right people come, something good will happen, people have to choose the right person..so we can take the international support and things will definitely come to the right place."

In a recent interview with ANI, ace cricketer Sanath Jayasuriya also said that "Cricket must go for it at any cost. I would like to thank the Australian cricket captain and High Commissioner who did not cancel the Test match," he said

Sri Lanka had recently hosted Australia for a multi-format series. The series was highly competitive and saw good cricket from both sides. Australia won the T20I series 2-1, the ODI series was won by Sri Lanka 3-2, while the Warne-Murli Trophy in Tests was shared after the two-match series ended in a 1-1 draw.

Sri Lanka has never seen a fuel and economic crisis on the island since independence in 1948 when only 10 per cent of its people are able to obtain fuel on a daily basis. (ANI)