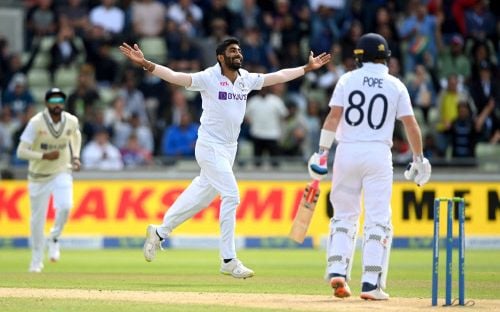 Birmingham: Pacer Jasprit Bumrah has been proving his worth as an outstanding pacer in SENA (South Africa, England, New Zealand and Australia) countries and has completed 100 Test wickets playing against them on their soil, becoming the sixth Indian bowler to do so.

In the 22nd over of the final innings on Day 4, Bumrah clean bowled a well-set opener Zak Crawley for 46 to reach the landmark. Crawley misjudged the ball and his bails went flying. After this, he soon dismissed an in-form Ollie Pope for a duck.

Among the four countries, most of his wickets have come in England. Across nine matches in England, he has taken a total of 37 wickets at an average of 25.18 and an economy rate of 2.67. His best bowling figures in English conditions are 5/64.

Australia also remains a favourite hunting ground for the lead Indian pacer as in his seven games there, he has taken 32 wickets at an average of 21.25 and an economy of 2.47. He took the advantage of Aussie conditions by producing his best bowling figures of 6/33.

New Zealand is the country where Bumrah has played the least amount of Tests and has attained limited success. In two Tests, he has taken six wickets at an average of 31.66 and an economy rate of 3.08. His best bowling figures in the country are 3/62.

Coming to the match, India has set England a target of 378.

England openers Alex Lees and Zak Crawley struck a century partnership after captain Ben Stokes led from the front taking four wickets to bowl out India for 245 in the second innings as the visitors set a 378-run target for hosts.

Resuming the post-lunch session at 229/7, India lost Mohammed Shami in the fourth ball of the Tea session as English captain Ben Stokes dismissed him for 13. From there on there was no looking back for the England skipper as he also went on to dismiss first-innings centurion Ravindra Jadeja who chopped the ball onto his stumps for 23 as the hosts lost their ninth wicket for 236.

In his next over Stokes dismissed Indian captain Jasprit Bumrah for seven to bowl out India for 245.

Chasing a big total England needed a solid start and their openers Alex Lees and Zak Crawley did exactly that scoring runs at a brisk pace. The duo struck a 50-run partnership with southpaw Lees being the aggressor of the two. He went on to score his half-century in just 44 balls.

The opening pair of Lees-Crawley carried on and they reduced the target to less than 300.

The duo took the team to the triple-figure mark to put pressure back on India. Just when it seemed that the game was going away from India their skipper Bumrah struck cleaning up Zak Crawley for 46. Hosts lost their first wicket for 107 and this score remained till the Tea session as they needed 271 more runs to win with nine wickets in hand.