Courtesy Ashwin's 18-3-55-4, India successfully managed to neutralise a sub-par first innings score of 244. Rival skipper Tim Paine (73 off 99 balls) was the only home batsman to show stomach for a fight. 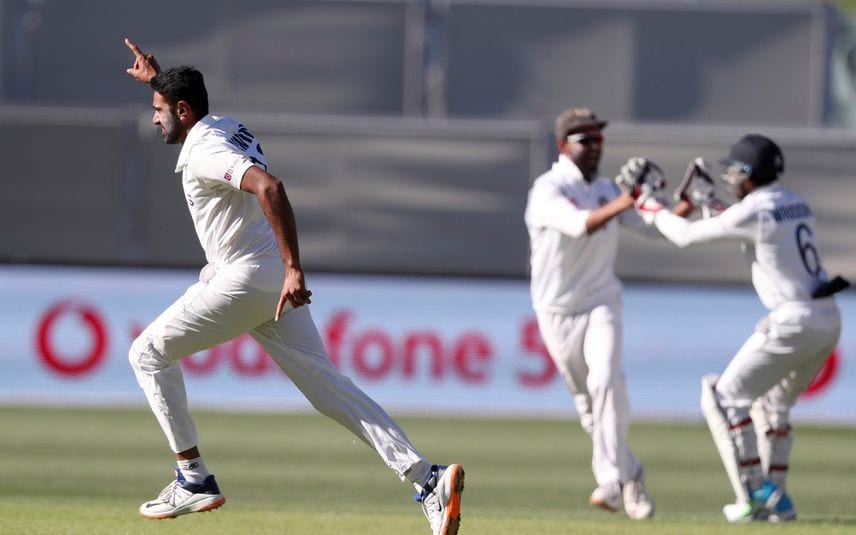 Adelaide: Senior off-spinner Ravichandran Ashwin produced one of his most memorable overseas performances as Indian bowlers collectively terrorised Australia into submission, bowling them out for 191 on the second day of the opening Day/Night Test here on Friday.

Courtesy Ashwin's 18-3-55-4, India successfully managed to neutralise a sub-par first innings score of 244. Rival skipper Tim Paine (73 off 99 balls) was the only home batsman to show stomach for a fight.

With a handy first innings lead of 53 runs, India found their opener Prithvi Shaw's defence being breached again before ending the day at 9/1 -- with an overall lead of 62 runs.

Indian magnificent bowling effort during the day could be segregated into three phases.

In the early afternoon, Bumrah bowled the fuller length to make the first inroads. Ashwin then took charge of late afternoon with his perfect length and made use of the additional bounce to blow away the middle-order.

And then under lights, Umesh Yadav (16.1-5-40-3) was brilliant with the old pink kookaburra as he bowled back of the length to get rid of the dangerous Marnus Labuschagne and Pat Cummins.

Mohammed Shami (17-4-41-0) was also immaculate with his length but he was let down by the fielders as the only glitch in their second day's performance was a poor catching effort.

But Virat Kohli wouldn't mind even four dropped chances as his bowlers forced the Australian batsman to go into a defensive shell in their 72.1 overs on second day.

It was one of the most 'Un-Australian' batting by a team that prides itself on intent.

Save for Labuschagne (47 off 119 balls), who couldn't capitalise on three reprieves, and skipper Paine, no other batsman seemed to know how to bat on a surface, which picked pace on the second day.

After Bumrah removed the two openers in the first session, Ashwin did the star turn in the second session.

Ashwin set up Smith with a few that were flighted with the angle and then bowled one that straightened and bounced a touch more. Smith, expecting turn, squared up and Ajinkya Rahane at first slip made no mistake.

Travis Head (7) wasn't reading Ashwin well and the left-hander got a flighted one that took the leading edge of his bat, which ended in a chest-high return catch for the bowler.

Debutant Cameron Green (11) would curse himself as his was a long hop asking to be pulled but the extra bounce got the top edge and captain Virat Kohli pulled off a fabulous catch at mid-wicket, diving full-stretch to his right.

This was after, Bumrah bowled a brilliant opening spell to send back the Australian opening pair of Joe Burns (8 off 41 balls) and Matthew Wade (8 off 51 balls) for identical scores.

The two were ready to stay put and wait but Bumrah angled a fuller one into Wade, which rapped him on the pads while he was trying to whip it to mid-wicket.

Burns, the man going through a bad patch, had changed his stance to a more open-chested one. He also did all the hard work but he was susceptible to being leg before. Bumrah fired one fast and full into the block-hole and got the decision in his favour as 'Umpires Call' in the DRS went India's way.

Labuschagne was insanely lucky when Bumrah dropped a dolly at fine leg after the batsman had mis-timed a pull shot off Shami. Before that it was a diving Wriddhiman Saha, who missed a tough but gettable edge off Bumrah's bowling.

After the dinner break, Labuschagne on 21, was dropped by Shaw at square leg and that was also a mis-timed pull-shot.

Umesh was fantastic in the twilight as he trapped Labuschagne with a delivery that kept low and then a short ball saw Cummins awkwardly fending it to gully.

A run-out and the fourth wicket by Ashwin saw Paine waging a low battle to reduce first innings lead.

At the start of the day, India's tail-enders contributed precious little and the visitors' first innings folded in just 93.1 overs.