Swepson was the star for Australia picking three for 23 in his four overs. He removed Shikhar Dhawan (28 off 21), Sanju Samson (10 off 9) and Shreyas Iyer (first-ball duck). Earlier, Wade's 80 and a quick-fire 54 from Glenn Maxwell helped Australia set an imposing 187-run target for India. 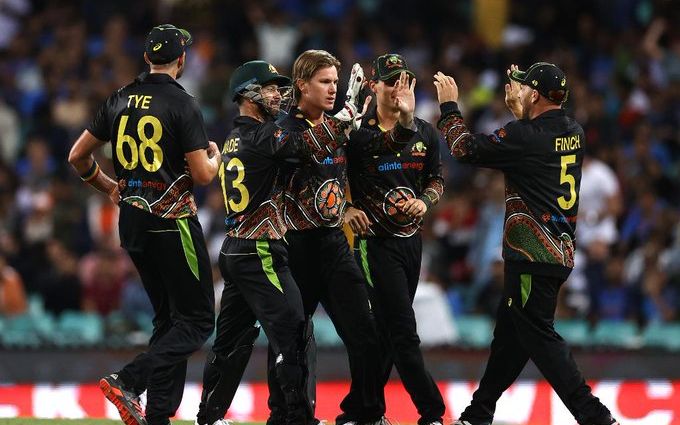 Sydney: Riding on wicket-keeper-batsman Matthew Wade's 80 and Glenn Maxwell's 54 and a combined haul of five wickets for 64 runs in 10 overs by spinners Mitchell Swepson, Adam Zampa and Maxwell, Australia defeated India by 12 runs in the third and final T20 International at the Sydney Cricket Ground.

The win restored some pride for Australia as they had lost the series 2-1 after going down in the first two matches. The Aussies had won the ODI series 2-1 prior to the T20Is.

India, who lost KL Rahul on just the second ball of the innings as the opener holed out to deep mid-wicket, kept losing wickets at regular intervals as the top-order caved in.

Only skipper Virat Kohli kept up the fight, making 85 off 61 deliveries. At one point in time, it seemed that Kohli and Hardik Pandya would tilt the game in India's favour as they took 20 runs in the 16th over and 13 runs in the 17th over to bring the equation down to 43 off 18 balls.

Swepson was the star for Australia picking three for 23 in his four overs. He removed Shikhar Dhawan (28 off 21), Sanju Samson (10 off 9) and Shreyas Iyer (first-ball duck). Earlier, Wade's 80 and a quick-fire 54 from Glenn Maxwell helped Australia set an imposing 187-run target for India.

Put into bat, Australia didn't have a great start as they lost skipper Aaron Finch in the second over. Finch was caught by Hardik Pandya at mid-off off Washington Sundar and went back to the pavilion without troubling the scorers.

Wade, who was leading the hosts in the second T20I in the absence of injured Finch, however, kept scoring boundaries at the other end and carried the Australian innings forward.

Australia moved to 51/1 at the end of the powerplay. Finch and Steve smith added 65 runs for the second-wicket before Smith was dismissed by Sundar in the 10th over at his individual score of 24.

But Wade, who had scored a well-rounded 58 in the second T20I, brought his second consecutive fifty in the 11th over bowled by left-arm pace bowler T Natarajan.

Glenn Maxwell, who came into bat next, then stitched another 50-plus partnership with Wade to take Australia on course for a big score.

Maxwell, in particular, was at his menacing best as he clubbed two sixes in the final over of leg-spinner Yuzvendra Chahal who went for 41 in his four overs. The right-handed batsman played plenty of reverse sweeps and switch hits during the course of his 36-ball innings.

The duo added 90 runs in just 53 balls before Wade was out in the penultimate over of the innings. His 53-ball 80 included seven fours and two sixes. Maxwell, after scoring 54 with the help of three fours and three sixes, was bowled by Natarajan in the final over.

For India, Sundar returned with figures of 2/34 while Natarajan picked a wicket while conceding 33 runs in his four overs.

Mumbai: Former South Africa great and Royal Challengers Bangalore Hall of Famer AB de Villiers has confirmed that he will be back with the franchise for ..

Dhaka: The International Cricket Council will soon re-introduce neutral umpires despite the Covid-19 pandemic providing an opportunity to give home umpires ..

Melbourne: Former New Zealand captain Daniel Vettori has been appointed as an assistant coach of the Australian men’ s cricket team.Vettori, who played ..