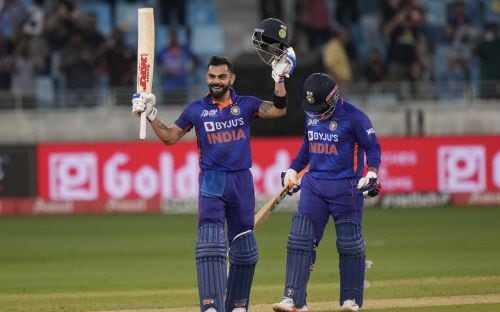 Dubai: Already out of the tournament, India signed off from Asia Cup 2022 on a high with a 101-run thrashing of Afghanistan in their final Super Four match at the Dubai International Stadium on Thursday.

In a dead rubber, talismanic batter Virat Kohli gave Indian fans tons of reasons to be happy. As captain Rohit Sharma was rested, Kohli was promoted to open the batting. What followed next was something which anyone could have predicted, leaving Kohli himself surprised.

Kohli ended his drought of not scoring a century in international cricket for 1020 days with a sensational career-best 122 off just 61 balls, laced with 12 fours and six sixes, at a strike-rate of 200.

After a rollicking opening stand of 119 off 76 balls, with stand-in captain KL Rahul making 65 of those runs, Kohli accelerated amazingly from 59 off 40 balls to get his next 63 runs off just 21 balls to score a long-standing 71st international century. On the back of Kohli's century, India made a mammoth 212/2.

Then, senior pacer Bhuvneshwar's spell of 5/4, with lots of swing and hitting the right areas consistently, dismantled the Afghanistan challenge, eventually restricting them to 111/8 in 20 overs.

It was a day to forget for Afghanistan, who arrived into this game less than 24 hours after a one-wicket heartbreak against Pakistan in Sharjah. They dropped catches, including of Kohli on 28, looked jaded and simply weren't at their best.

After first two overs yielded no boundaries, India got going as Rahul and Kohli hit a four each through leg-side off Fazalhaq Farooqui. Rahul then pulled Mujeeb Ur Rahman through backward square leg before cutting and pulling off Fareed Ahmed for a brace of fours.

Kohli got on the aggressive mode by dispatching Mujeeb for fours through down the ground and sweeping through backward square leg, before ending the powerplay on a high with a six slammed down the ground.

Post power-play, Rahul pulled Rashid Khan for six over deep mid-wicket while Kohli was dropped on 28 as Ibrahim Zadran parried the ball coming off a mishit on Mohammad Nabi's over the boundary rope for six more.

Kohli looked in sparkling touch, with an inside-out loft over extra cover being the standout to reach his fifty in 32 balls. In the next over, Rahul got his fifty in 36 balls with pull and loft fetching him successive fours off Nabi.

But in a bid to go big, Rahul pulled on a cross-seam ball off Ahmed and top-edge flew to long-on. Suryakumar Yadav flicked nonchalantly over fine leg for six on his first ball. But on the very next ball, he chopped on to his stumps off Ahmed.

Kohli continued to impress against spin in his knock, lofting Rashid over deep mid-wicket for six. He then upped the ante with successive flicks for fours off Ahmad and smacked a brace of fours through off-side off Farooqui.

After slamming Ahmed down the ground in 19th over, Kohli brought up his maiden T20I century in 53 balls with a six pulled high over deep mid-wicket for six. Farooqui came in for more thrashing in the final over as Kohli thumped him for sixes over long-off and deep mid-wicket before creaming a four through cover to take 18 runs off the final over.

His unbeaten 122, a mix of classic and brutal cricket shots at the same time, came at a strike-rate of 200, which is also the highest score by an Indian men's batter in T20Is. Kohli now joins former Australia captain Ricky Ponting in scoring 71 international centuries, the joint second-most in the tally led by India batting legend Sachin Tendulkar at 100.

With the ball, Bhuvneshwar was right on the money from the word go, shaping one back in to trap Hazratullah Zazai lbw. Two balls later, he produced an absolute jaffa to shatter Rahmanullah Gurbaz's stumps to send both openers back to pavilion in opening over.

Swinging the ball both ways and relentlessly pitching in right areas, Bhuvneshwar was making Afghanistan batters dance to his tunes. Karim Janat gave a thick edge to first slip on an outswinger while Najibullah Zadran missed his flick and trapped lbw on an inswinger.

After Arshdeep Singh trapped Nabi lbw, Bhuvneshwar completed his five-wicket haul by having Azmatullah Omarzai chipping a knuckle ball straight to cover. Rashid hit couple of boundaries before holing out in the deep off Deepak Hooda's first ball.

Zadran struck some boundaries while Mujeeb played the long handle against Ravichandran Ashwin. Though Mujeeb eventually was castled by Ashwin, Zadran got his fifty with sixes off Dinesh Karthik in the final over. But, by then, the result was a foregone conclusion.