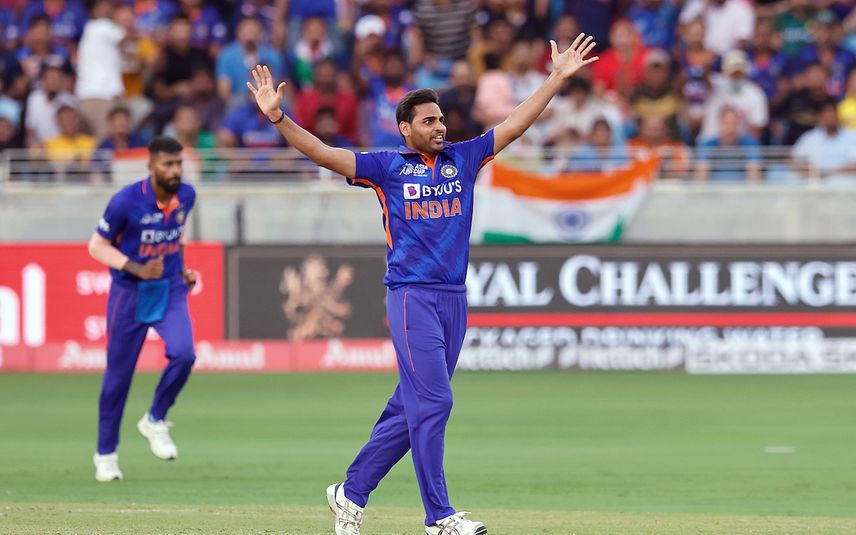 Dubai: Fiery and tight bowling spells by Hardik Pandya and Bhuvneshwar Kumar helped India bundled out arch-rival Pakistan for 147 in a blockbuster clash in the second match of the Asia Cup 2022 here at Dubai International Cricket Stadium on Sunday.

Opting to field first, India got off to a decent start as their star bowler Bhuvneshwar Kumar gave his team a big breakthrough as he dismissed Pakistab captain Babar Azam after scoring 10 runs on 9 deliveries in the third over of the innings.

After the captain's wicket, Mohammad Rizwan played some bold and aggressive shots to keep the scoreboard running. Fakhar Zaman then came to bat on the crease to join hands with the opener.

Avesh Khan provided India with another breakthrough as he sent Zaman back to the pavilion to give his team an upper hand. Khan got the wicket after conceding a couple of boundaries to Rizwan. Iftikhar Ahmed then joined the opener Rizwan on the crease.

The duo of Rizwan and Ahmed went on to take their team's total beyond the 50-run mark. It was a good first half for Indian bowlers as they restricted Pakistan to 68/2 after 10 overs.

Yuzvendra Chahal's dropped the catch of Iftikhar Ahmed which doesn't prove costly, with Hardik Pandya dismissing the batter in the next over for 28 - Pakistan 87 for 3 in 12.1 overs.

Pandya struck twice in the 15th over of the innings and gave Pakistan big blows as he dismissed Rizwan for 43 in 42 balls and new batter Khushdil Shah (2).

In the 17th over of the innings, Bhuvneshwar gave Pakistan team a big blow as he sent packing Asif Ali on a brilliant bowl which was caught by Suryakumar Yadav.

India did not give Pakistan a chance to balance itself after back-to-back blows. Arshdeep Singh struck against in the 18th over and dismissed Mohammad Nawaz who could only manage to score one run.

In the 19th over, Pakistan's Haris Rauf and Shadab Khan opened their hands to smash big hits, but their hammering was cut short by Bhuvneshwar LBW out Shadab Khan after scoring 10 runs.

In the last, over of the innings, Arshdeep ended Pakistan's inning as he helped India bundle out Men in Green for 147.