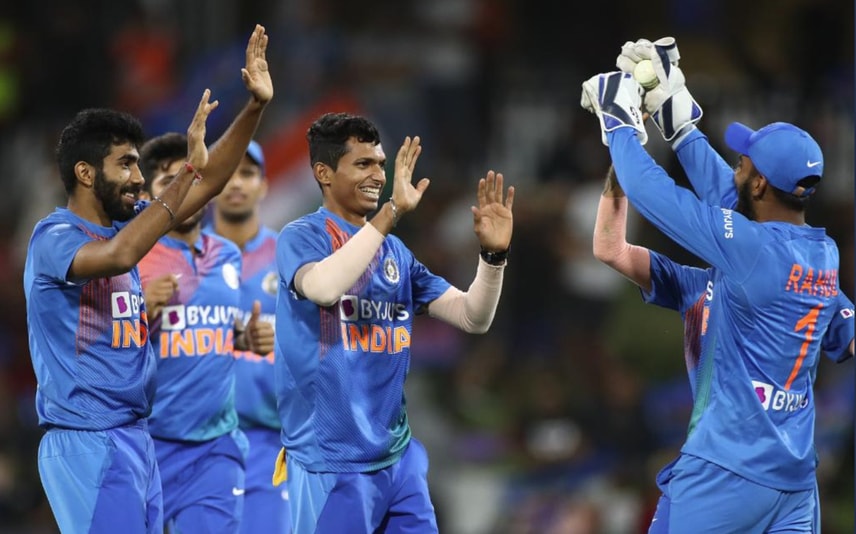 Indian Players after picking up a wicket (Photo- ICC)

Martin Guptill (2), Colin Munro (15) and Tom Bruce (0) were dismissed early in the innings. Tim Seifert (50) was dismissed soon after his half century. The batsmen who came after that failed build a partnership with Ross Taylor.

The last recognised batsman, Ross Taylor, was dismissed for 51 in the 18th over. He was dismissed by Saini. Apart from Taylor and Seifert, nobody from the home side contributed considerably to their total.

Jasprit Bumrah was the pick of the India bowlers after he picked up three wickets while giving away only 12 runs in his four overs.

The home side needed 164 to win the final T20I match in the series against India.

India were up 4-0 in the series, which made it a must win game for New Zealand inorder to avoid a white wash in their home turf.

Earlier, Solid knocks from KL Rahul and skipper Rohit Sharma steadied the Indian innings after the early fall of Sanju Samson. KL Rahul was dismissed by Hamish Bennett before he could get to his half century.

Skipper Rohit Sharma (60) retired hurt after scoring half century in the final T20I.

Sanju Samson failed to impress yet again as he failed to get past single digit in the final T20I against New Zealand. He managed to score only 2 (5 balls) before he was dismissed by Scott Kugelejin.