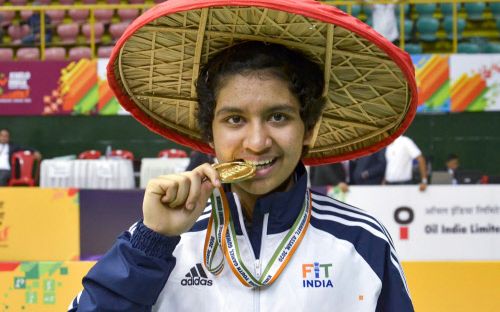 New Delhi: The 16-year-old Tasnim Mir who became the first Indian badminton player to be ranked world number one, has said that her sole focus is doing well in the senior ranks as well.

"I always want to perform well. This [World No 1 rank] is a boost and I wish to take this consistency to the senior category as well," Tasnim Mir said in a virtual media interaction facilitated by the Sports Authority of India on Sunday.

"I want to perform well when I play senior tournaments and of course, compete in the Olympic Games," she added.

Tasnim Mir clinched three titles in BWF junior tournaments to claim the pole position in the World Rankings. She has been training under Indonesian coach Edwin Iraiwan in Guwahati for the last four years.

"Edwin sir is very experienced. I have improved a lot under him. He makes me play with senior players, especially men. Competing with the men has helped me," said Tasnim.

Tasnim Mir, who trained at the SAI-Gopichand Academy for two years, is indebted to her father Irfan Mir for exposing her to the sport. "Since he is a coach, he would take me to the stadium since I was 7 years old. I fell in love with the sport and started regular practice. Since then, I competed in State-level tournaments and moved into the sport full time. I have never thought of playing any other game. My father is my only inspiration."

A Khelo India scholar, Tasnim Mir was inducted in the Target Olympic Podium Scheme (TOPS) Development Group in July 2020. "Sponsorship always helps. SAI has supported me a lot in my journey. Badminton is an expensive sport and tournament expenses are tough. These schemes have been supportive and helped me compete in tournaments."

Tasnim Mir, who has a psychologist to help her, says she has matured over the years. "My psychologist always motivates me even when I lose. He says failure is a part of life. There are many good players in India now and I know I have slight pressure and a responsibility because the nation will hinge its hopes on me. However, I'm looking at improving myself." (ANI)

Bangkok: India stormed into the quarterfinals of the ongoing BWF Uber Cup 2022 after crushing USA 4-1 in Bangkok.In the Group D encounter, World No. 7 ..

Bambolim: Two-time Olympic medalist PV Sindhu, who was taking a part in Goa Fest 2022 on Friday, said that it's important to learn from one's defeat and ..

Bangkok: The Indian team will begin their BWF Thomas and Uber Cup Finals 2022 campaign on May 8 with the men's team taking on Germany in their first Group ..

Manila: Double Olympic medallist P V Sindhu eked out a thrilling win over China's He Bing Jiao to enter the women's singles semifinals of the Badminton ..