From Almora to Bangkok: Journey of Lakshya Sen who gave India the lead in Thomas Cup final

In the short span of his international career, Lakshya Sen has impressed everyone with his passion, grit, and dedication, which led to him winning many accolades for the country and the youngster continued the same, when he gave India a 1-0 lead in the Thomas Cup final against Indonesia on Sunday in Bangkok. 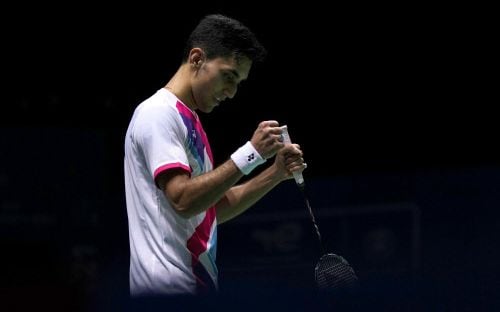 New Delhi: In the short span of his international career, Lakshya Sen has impressed everyone with his passion, grit, and dedication, which led to him winning many accolades for the country and the youngster continued the same, when he gave India a 1-0 lead in the Thomas Cup final against Indonesia on Sunday in Bangkok.

It was Sen, who began India's maiden Thomas Cup final tie at the Impact Arena by taking on world No 4 and Tokyo 2020 bronze winner Anthony Ginting.

The World Championship bronze winner, Sen went into the match with a 1-0 head-to-head advantage, having beaten Ginting at the German Open in March. However, the 20-year-old Indian had only won once in the ongoing Thomas Cup and lost thrice. The young Indian went toe-to-toe with the Indonesian in the early exchanges, but Ginting switched gears to win 12 straight points and pocket the opening game with ease in just 17 minutes.

In the second game, the momentum was with Ginting, who was operating on the more favourable side of the court, playing against the drift, and brimming with confidence but India's top-ranked player, Sen responded well and upped his pace and attack to win the second game and force a decider.

Despite trailing in the opening half of the third game, Lakshya dug deep to churn out some brilliant winners and matched Ginting's immaculate net game. Sen, who is ranked nine in the badminton world rankings, eventually prevailed 8-21, 21-17, 21-16 to put India ahead in the tie.

After scoring the first point of the tie, Sen was delighted and dedicated the win to the team.

"I was going to play from the better end in the last 11 points of the game, so I was really pumped up. I'm happy that I pulled out a win in the third game. In the closing stages, I was really nervous and I was trying to control it with deep breaths," the shuttler said.

"This one is for the team, they have been backing me through my bad performances, or when I played well and couldn't get a win. I'm happy that I pulled out the first point for the team," he added.

In recent times, Lakshya has been in sensational form but his journey wasn't easy. Born in Almora, a cantonment town in Kumaon Hills of Uttarakhand, the shuttler has faced various trials and tribulations while chasing his dream of making it big in badminton.

Coming from a badminton family - his grandfather was a national-level player, father D K Sen is a senior coach with Prakash Padukone Academy in Bengaluru, and brother Chirag Sen is a player and was ranked World No. 2 in Junior Rankings in 2016 - Lakshya was a successful junior player who is now blazing a trail in the senior circuit.

The first big change in Lakshya's life came in 2013 when his father DK Sen took him to the Prakash Padukone Academy in Bengaluru to train under U Vimal Kumar and Prakash Padukone. That helped him carve a path to the top of the junior circuit, becoming World's No 1 junior player in 2017.

The transition from a top junior player to success in the senior circuit has proved a bottleneck for many players and Lakshya, too, was getting bogged down by the tribulations when he had a short stint at the academy run by Danish legend Morten Frost. They worked on his strength and stamina, making Lakshya realise how to summon the last bit of energy to execute the next smash even when the body was unwilling to go on.

Lakshya, who had a brilliant year in 2018 winning bronze at World Junior Championships, gold at Asian Juniors and gold in mixed team and silver in men's singles at Youth Olympic Games in Buenos Aires, made a successful entry winning a couple of Super 100 titles.

He greatly benefited from a two-week training stint with Olympic Champion Viktor Axelsen in August 2021. Axelsen had invited Lakshya along with Loh Kean Yew of Singapore, the current World Champion, Brian Yang of Canada, Toby Penty of Denmark, and Felix Burestedt of Sweden to train with him in Dubai. Lakshya later said he learned a lot about training methods, strengthening and conditioning during that stint.

It is that stint with Axelsen which has eventually put Lakshya on course to his recent success. IANS