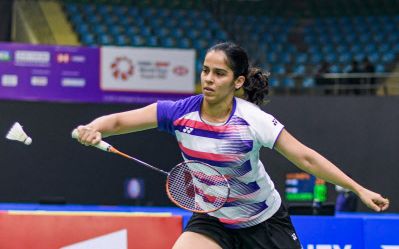 Malvika Bansod defeated Nehwal 21-17, 21-9 in the second-round match which lasted for 35 minutes.

The 31-year-old Nehwal was trailing 5-7 in the first game, and Malvika was in no mood to let this advantage and she ended up winning the first game 21-17.

Bansod then did not look back, and she continued with her momentum, winning the match inside 35 minutes.

Sindhu was at her dominant self in the first game and she wrapped up the game inside 13 minutes. Continuing from where she left off, the 26-year-old took full advantage of her momentum and ended up winning the match within 30 minutes.

Earlier, Badminton World Federation (BWF) on Thursday confirmed that seven players have been withdrawn from the ongoing India Open 2022 after testing positive for COVID-19.

"The players returned a positive result to a mandatory RT-PCR test conducted on Tuesday. Doubles partners deemed close contact of the seven players have also been withdrawn from the tournament," BWF said in a statement.