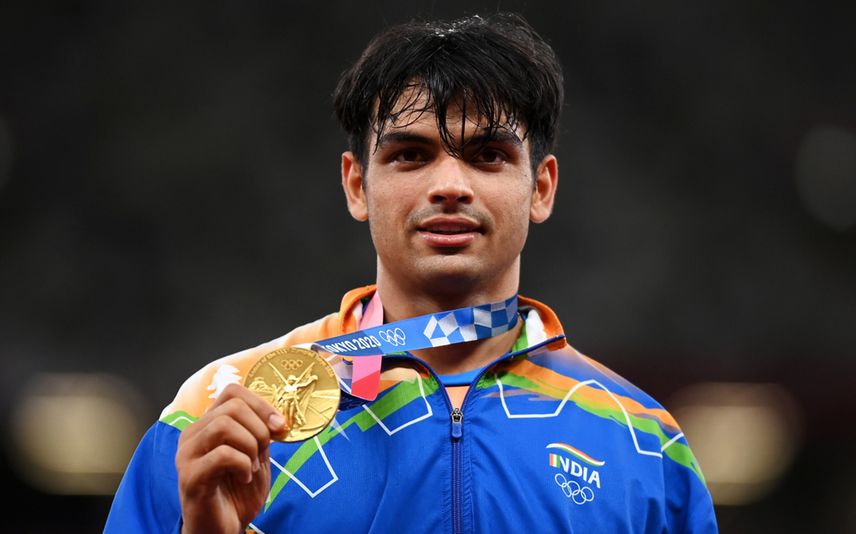 New Delhi: The Athletics Federation of India (AFI) on Thursday named a 37-member Indian athletics team, to be led by Olympic champion javelin thrower Neeraj Chopra, for the upcoming Commonwealth Games, with the selection committee picking the athletes on expected lines with no major surprises.

Out the of the 37 picked by the selection committee of the AFI, 18 are women, with the likes of star sprinters Hima Das and Dutee Chand getting their berths through the women's 4x100m relay team.

AFI president Adille Sumariwalla said that the selected athletes, except for those who have been asked to prove form and fitness and who are competing abroad, will train in Chula Vista in USA ahead of the July 28 to August 8 CWG and their visas are awaited.

The India team also have the likes of Avinash Sable, who broke his own 3000m steeplechase national record for the eighth time recently, as well as Jyothi Yarraji, who broke her own 100m hurdles NR twice last month.

It also has Aishwarya Babu, who smashed her own triple jump national record with a stunning 14.14m effort during the recent National Inter-State Championships in Chennai.

However, 200m national record holder Amlan Borgohain, who won a sprint double (100m and 200m) during the National Inter-State, missed the bus as he could not reach the CWG qualifying standard set by the AFI.

Although selected, some of the athletes will have to prove their form and fitness before the Birmingham Games.

Veteran discus thrower Seema Punia has been given a chance to feature in her fifth CWG considering her past performances in the Games. Her participation, however, is subject to reaching the qualifying standard set by the AFI in a competition in USA.

Punia has won a medal in each of the four CWG she has taken part earlier.

"We have allowed her to train and compete in the USA considering here past results in the CWG and Asian Games. Her participation in the CWG will absolutely depend on her performance in USA," Sumariwalla said of Punia, who skipped the June 10-14 National Inter-State Championships.

"We are requesting the Indian Olympic Association to increase our quota by one and to assist in securing accreditation for a couple of athletes," Sumariwalla said.

The AFI has been given a quota of 36 in India's contingent for the CWG.

Shot putter Tajinderpal Singh Toor will have to perform well in Kazakhstan while Amoj Jacob has been selected in the men's 4x400m relay team subject to his recovery and fitness level.

Jacob had pulled his hamstring while running the last leg of the India 'A' team during the Inter-State Championships.

"Similarly, discus throwers Navjeet Kaur Dhillon and Seema Antil Punia as well as hammer thrower Sarita Singh will have to perform in Kazakhstan or California. Race walker Bhawna Jat will have to prove her fitness," the AFI president said.

National record holder high jumper Tejaswin Shankar, who won gold at the NCAA Outdoor Track & Field Championships 2022 in the US last week with a season-best performance of 2.27m, was not picked as he did not take part in the National Inter-State and did not seek exemption.

He also said that Tamil Nadu long jumper Jeswin Aldrin, who won gold in the Federation Cup in April with a wind-assisted 8.37m, was not picked in the team due to lack of consistency.

Sumariwalla also said that Sable may take part in both 3000m steeplechase and 5000m event -- in which he also holds the national record -- if the CWG programme permits.

Karnataka's Simi, who had finished sixth in 100m final with a timing of 11.88s, was also named in the team.

AFI Planning Commission chairman Lalit Bhanot said there was no deviation from the policy of not picking non-campers for the relay teams.

"Srabani Nanda was training in Jamaica with the permission of AFI, it's just like Dutee training with her coach N Ramesh in Odisha. They can now train together in the remaining one month before the CWG. They will join the camp, actually have already joined the camp and will now train together," Bhanot said.

"In order to ensure that nobody hides from various tests, they take permission from AFI and they gave details where they were training."