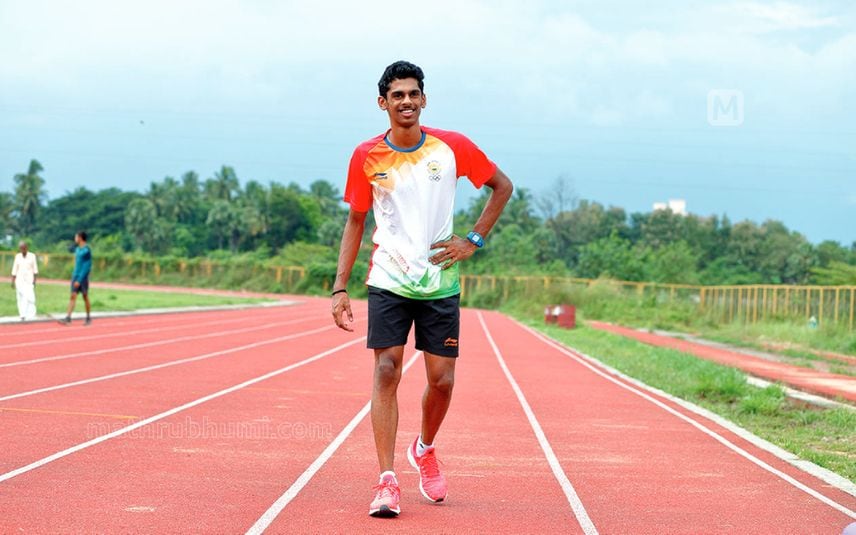 Patiala: Long jumper M. Sreeshankar of Kerala on Tuesday booked a place in this year's Olympic Games with a national record leap of 8.26 metres in the 24th National Federation Cup Senior Athletics Championships.

On a day when Tamil Nadu's S Dhanalakshmi handed Dutee Chand of Odisha a rare defeat in a national competition by blazing the track to win the women's 100m sprint in a stunning time of 11.39 seconds and Amoj Jacob of Delhi secured a personal best in winning the men's 400m, it was Sreeshankar's national record that stole the thunder -- 11 days before turns 22 -- at the Netaji Subhas National Institute of Sports complex.

Sreeshankar found the perfect combination of acceleration, take off, and elevation on his fifth attempt to realise his dream of securing an automatic entry in the Olympic Games by breaching the entry standard of 8.22m. The world No. 24 improved on his own national mark of 8.20m, set in Bhubaneshwar on September 27, 2018.

Getting off the pit, Sreeshankar sensed that he had attained his goal, raising his arms even as he watched the officials measure the distance. His joy knew no bounds when he got the confirmation on the electronic board. On each of his four previous attempts, he had breached the 8m mark. His string of jumps read: 8.02m, 8.04m, 8.07m, and 8.09m. He found the explosive combination of 8.26m on the fifth try.

"I am thankful to everyone who supported me to achieve this result. I wanted to prove a point as everyone thought 8.20m was my peak and after that my performance was not the same. I am really very happy," said Sreeshankar.

Delhi's 23-year-old Jacob showed a fine turn of speed to combine with staying power to claim the men's quarter-mile crown with a career best time of 45.68 against more experienced runners. On the contrary, M.R. Poovamma's resilience and determination in the women's 400m proved too good against a bunch of youngsters, each eager to make an impression.

Gurindervir Singh of Punjab dominated the men's 100m dash, winning in 10.32 seconds, showing that the personal best of 10.30 seconds achieved in the semi-finals was not a flash in the pan. He was a picture of confidence and power as he led from gun to beam, leaving K Elakkiadasan of Tamil Nadu and Krishnakumar Satish Rane of Maharashtra to fight for the second spot.

In the women's 100m final, 22-year-old Dhanalakshmi scripted a start-to-finish win, riding on an explosive start that placed her in the lead very early in the blue riband race. If there were any signs of nerves when she was up against the likes of Dutee, Hima Das, and Archana Suseendran, Dhanalakshmi did not let anyone see that, powering her way to a famous victory.

Dhanalakshmi produced only her second best time, a hundredths of a second slower than the 11.38 seconds she had clocked in the semi-final heats on Monday. Dutee tried hard to catch up but the girl from Tiruchirapalli showed no signs of slowing down as she broke the beam 0.19 seconds before the Asian Games medallist and World Universities Games champion.

Those who scurried to the record books discovered that the last time Dutee did not win a race featuring only Indians was back in the Inter-Railway Championship in Bhopal in August 2015, a month after she ended up with bronze in the National Inter-State Athletics Championships in Chennai.

Late in the day, Harmilan Kaur Bains of Punjab spread-eagled the women's 1500m field that included P.U. Chitra of Kerala and Lili Das of West Bengal with a personal best time of 4:08.70sec. She set a hot pace from the start and only Chitra tried to catch up in the first lap and a half, only to realise that Harmilan Kaur Bains was in a league of her own.

It was the second fastest time for a metric mile by an Indian woman, the national record of 4:06.03 sec, having been set by Sunita Rani in the Busan Asian Games back in October 2002. Harmilan, 22, is daughter of former middle-distance runners Amandeep Bains and Madhuri Singh, who won the 800m silver in the Busan Asian Games.IANS